Karine Jean-Pierre scrambled after this bad moment - The Horn News 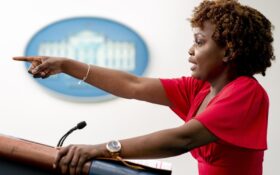 President Joe Biden claims to have taken more executive action on firearms in his first 18 months than any other president.

And on Thanksgiving, Biden condemned “the purchase of semi-automatic weapons,” a huge category of firearms. He called it “sick” that American voters would exercise their Second Amendment rights.

After that, the president sent White House press secretary Karine Jean-Pierre to control the spin.

“We’re going to try to get rid of assault weapons… as I get in and start counting votes,” Biden said at a Thanksgiving event in Massachusetts.  “The idea that we still allow the purchase of semi-automatic weapons in this country today is sick. It is just sick. It has no, no social redeeming value. Zero. None.”

On Monday, Jean-Pierre held a press conference for the first time since Biden’s ambiguous statement about guns. She told one reporter that Biden had misspoken (again).

A reporter asked, “Did the President misspeak or does he, in fact, want to ban all semi-automatic guns?… Obviously, that’s a huge category of [semi-automatic] guns, from rifles to pistols to shotguns, that are not assault weapons.”

The White House has denied any plans for executive action on gun control Instead, Biden wants Congress to address this issue.

“Just a couple of months ago, there was a bipartisan legislation on protecting our communities to really deal with the effects of gun violence,” Jean-Pierre said.

“The President is an optimist, but he also understands that it is — he sees it as his responsibility to continue to make the case. I don’t have anything else to preview as to any additional executive action that will be taken from here.”

KJP to @PhilipWegmann on whether Biden wants to ban all semi-automatic guns: "No, he was–he was talking about assault weapons. That's what he was talking on that–on that morning or that afternoon when he was asked that question." pic.twitter.com/IiUgrmcRB7

“When I was in the Oval Office in a meeting with the President, he actually brought this up himself, because he knows how his comments were reported over the weekend. And he wanted to be very clear,” Jean-Pierre alleged.