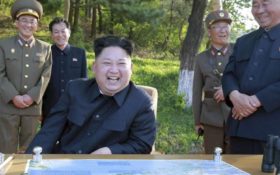 North Korea’s news agency KCNA reported Kim, “expressed the conviction that it would make a greater leap forward in this spirit to send a bigger ‘gift package’ to the Yankees.”

South Korean and Japanese officials said the suspected Scud-type short-range missile flew about 450 kilometers (280 miles) on Monday morning before landing in Japan’s maritime economic zone, setting off the usual round of condemnation from Washington and the North’s neighbors.

North Korea has shown great disrespect for their neighbor, China, by shooting off yet another ballistic missile…but China is trying hard!

URGENT: Get this memory-booster before Big Pharma has it banned (sponsored)

This sets up the possibility that North Korea hopes to use the test to show it can hit U.S. targets near and far and emphasize its defiance of U.S.-led pressure on its missile and nuclear programs, which has included vague threats from President Donald Trump and the arrival in Korean waters of powerful U.S. military hardware.

Scuds are capable of striking U.S. troops in South Korea, for instance, and the two newly developed missiles tested earlier this month have potential ranges that include Japan, Guam and even, according to some South Korean analysts, Alaska.

The U.S. is expected to launch an interceptor missile with the sole purpose of shooting down North Korea’s intercontinental ballistic  missile for the first time Tuesday.