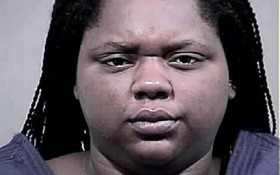 Horrible. Chilling. Monstrous. Those are the words that come to mind when one pictures the La Plata, Maryland woman who was found pushing her dead son in a playground swing earlier this year.  Monday, she was indicted and charged with manslaughter and child abuse, authorities announced.

The Charles County State’s Attorney’s Office announced that Romechia Simms, 24, was arrested Saturday and faced an arraignment Monday. The indictment charges her with manslaughter, first-degree child abuse and child neglect.

Simms placed her 3-year-old son, Ji’Aire Donnell Lee, on the swing the morning of May 20 and he stayed there until he was found dead two days later, county sheriff’s office spokeswoman Diane Richardson said in May. The mother was still pushing the swing.

Sheriff’s deputies went to the park about 7 a.m. on May 22 after being called to check on the welfare of the woman and child, Richardson said. The officers went to remove the boy from the swing and give him first aid, but “it was instantaneously clear the child was dead,” she said. There were no signs of trauma to his body. Simms was taken to a hospital for an evaluation.

A medical examiner later ruled the boy died of dehydration and low body temperature. His death was ruled a homicide.

May 21 was cold for late May, Richardson said, “rather chilly and it drizzled all night.”