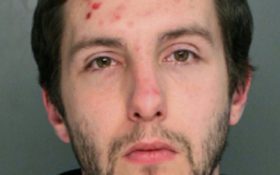 Authorities say a man covered in blood walked into a Pennsylvania hospital and told staffers he had just fatally stabbed his boyfriend.

Manheim Township police say 30-year-old Matthew Van Zandt is charged with homicide in the death of 31-year-old Ian Shannon, whose body was found Wednesday in a Lancaster home.

LNP reports Van Zandt was arraigned Friday, denied bail and taken to prison. A preliminary hearing is scheduled for Wednesday.

Authorities say Van Zandt walked into an Allentown hospital early Wednesday and told an emergency room nurse about the slaying. They say he also told a hospital security guard that the knife he used was in his backpack.

It wasn’t known Friday if Van Zandt has retained an attorney.