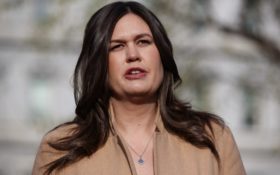 White House press secretary Sarah Sanders is holding her first briefing in more than a month, but the questions aren’t to come from working journalists.

Sanders made herself available Thursday for what the White House said was a “kids-only press briefing” held for children participating in “Take Our Daughters and Sons to Work Day.”

Journalists who cover President Donald Trump and the White House on a daily basis have been waiting for a similar opportunity since Feb. 28, the last time Sanders held a briefing.

Questions about Sanders’ credibility resurfaced after special counsel Robert Mueller’s Russia report revealed she admitted to investigators she had made an unfounded claim that “countless” FBI agents had reached out to express support for Trump’s decision to fire FBI Director James Comey.