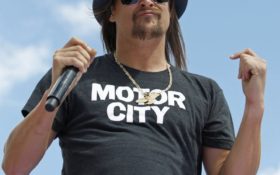 Kid Rock told SiriusXM host Howard Stern, “Are you kidding me?” during an expletive-laden interview Tuesday.

The Detroit-area rocker has been teasing the public for months. At a Sept. 12 concert, Kid Rock was introduced as Michigan’s “next senator” and talked about running for president.

According to the Detroit Free Press , Kid Rock said his staff knew there wouldn’t be a run for office. But with all the attention, and a new album in the works, he says he told them: “Let’s roll with it for a while.”

Kid Rock, whose real name is Robert Ritchie, was a target of protests during recent Detroit concerts because of his use of the Confederate flag.