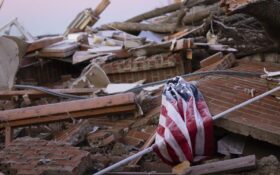 In the desperate hours after the massive storm struck, Andy Beshear took time out from his duties as governor of the hardest-hit state early Saturday to do what a lot of his fellow Kentuckians were doing.

Again and again, he made calls to track down his cousin Jenny in Dawson Springs.

“There’s a good ending to the story,” Beshear, the state’s Democratic governor, said at a news conference Monday. “It took me eight hours to get in touch with her, just calling over and over.”

But his extended family also was among the Kentuckians grieving the loss of life from the storms. The governor said he has an uncle by marriage who lost two cousins who died in Muhlenberg County.

All of that may explain why Beshear, the face of his state’s response to the historic outbreak of tornadoes, has veered at times between assertions of steadfast determination — declaring that Kentuckians are “strong enough to rebuild″ — and raw emotion. He has mourned with every stricken town, but no subject has touched him more personally than the devastation in Dawson Springs, his father’s hometown and a place he has visited his entire life.

“This is a place where I’d go and I’d sit on my grandparents’ front porch,” he said.

Beshear, who since the early days of his term has led his state’s battle against the COVID-19 pandemic, came under heavy scrutiny amid early uncertainties on the storm-related death toll, especially at a candle factory that was leveled in Mayfield. The governor is known for his frequent vows that “we’ll get through this together,” first in fighting the coronavirus and now in responding to the storms. He has made multiple visits to the stricken region and held numerous news conferences, putting him in the national spotlight.

Dawson Springs is connected to a mini-political dynasty in the Bluegrass State. Beshear’s father, former two-term Gov. Steve Beshear, grew up in the tight-knit western Kentucky community, where a local leader estimates at least 60% of the town of nearly 3,000 is “beyond repair.”

“It’s a personal tragedy,” Steve Beshear said in a phone interview. “It’s a delightful small-town community. It was one of those places that was so easy to grow up in, because everybody knew everybody, and everybody watched out for everybody. If you ever did anything wrong, they (parents) knew it before you got home.”

The storms killed dozens of people in the state and crippled towns across a long swath of western Kentucky. In Dawson Springs, homes and businesses were in ruins as the realization sunk in that the recovery will take years.

“For the most part, you can go three city blocks and it all looks like toothpicks,” said Darryl Kelley, who was delivering food and water around town. “A lot of people are just thankful they’re alive.”

Some deliveries took him to homes reduced to rubble. Residents searched the wreckage in hopes of finding possessions they could salvage.

One family suffered an unspeakable tragedy — the death of a baby girl.

Douglas Koon, his wife, Jackie, and their three children huddled in his mother-in-law’s bathroom in Dawson Springs as the storm approached. The tornado hit the house, flinging the family around and tossing a bathtub in the air that was shielding two of his sons. The couple put their 2-month-old, daughter, Oaklynn, in a car seat to protect her, and she appeared to be OK Saturday.

By Sunday, the baby was having seizures and doctors noticed a brain bleed. They believed she had a stroke, Koon said in a Facebook posting.

Early Monday, the family posted that Oaklynn had died. In a text message to The Associated Press on Monday, Koon said he was struggling “to process everything that I’m going through.”

The destruction in the town was widespread. The top county official, Judge-Executive Jack Whitfield Jr., said “hundreds” of homes in Dawson Springs were destroyed. He estimated that 60% to 75% of the Hopkins County town was “beyond repair.”

“It looks like a bomb went off,” he said. “It’s just completely destroyed in areas.”

Andy Beshear described the grim view from the front porch that he had visited with his grandparents as a kid. The house his dad grew up in was intact, but the devastation was in clear sight.

“One block up and left or right is just gone, just flattened,” the governor said.

Steve Beshear moved away from Dawson Springs decades ago, attending the University of Kentucky and then building successful careers in law and politics, culminating in his election as governor in 2007 and reelection four years later. But his memories of the town endure. He rattled off the names of streets that took direct hits from the storm.

And he recalled the visits back home and the generational bonding — including the rides his children got on his father’s small tractor.

“I think one of Andy’s memories is riding down the street on that tractor in granddad’s lap,” Beshear said. “We had some great times when the kids were growing up.”

The Beshear name remains prominent in Dawson Springs because it’s also the name of the funeral home that’s been in the family for generations. It started as a combination funeral home and furniture store in 1909, according to Steve Beshear, started by the former governor’s great uncle. The cousin the governor tried to reach after the storm hit, Jenny Beshear Sewell, is now the funeral home’s owner and president.

As Andy Beshear monitored the horrifying damage reports in the hours after the storms struck, he realized Dawson Springs was hit hard. While leading the response, he took time to make the calls that would last for hours in his frantic search for his cousin.

“Got to see her later that day because the moment it was safe to fly, we went first to Mayfield and then to Dawson,” he said. “Got to give her a hug.”