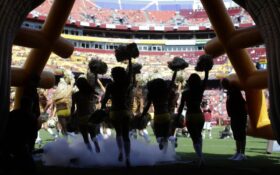 Kentucky has fired its cheerleading coaches after an internal investigation determined they failed to oversee off-campus events that included hazing, alcohol use and public nudity by the championship squad.

The school announced Monday that head coach Jomo Thompson and assistants Ben Head, Spencer Clan and Kelsey LaCroix were fired from the program, which has won 24 national titles the past 35 years.

The three-month investigation also found “lax oversight and poor judgment” by longtime primary advisor T. Lynn Williamson, Kentucky’s principal deputy general counsel. Williamson retired days after learning of the investigation and being told to have no contact with the squad.

The review, which involved interviews with more than 60 squad members, coaches and administrators, found that the activities occurred last summer during a retreat at a Kentucky lake and a cheerleading camp in Tennessee.

It stated that some cheerleaders at the retreat performed gymnastics routines that included hurling teammates into the water, known as “basket tosses, while either topless or bottomless within view of some of the coaches.

Coaches also didn’t confiscate alcohol brought to the retreat by some team members, the report added, with some members requiring medical treatment for intoxication. Some cheerleaders at the camp were directed to perform lewd chants and wear outfits that did not underwear.

The report found no sexual assault or sexual misconduct during the trips.

Kentucky President Eli Capilouto said in a teleconference that the coaches knew or should have known about the inappropriate behavior.

“They failed to take sufficient steps to address the conduct,” he said. “They did not act in ways that would protect the health, safety and well-being of our students who were entrusted to their care.

The athletic department will take control of the cheerleading program and be led by associate director Sandy Bell, who will begin a national search for a new coach.