Kellyanne Conway stuns everyone with new look - The Horn News 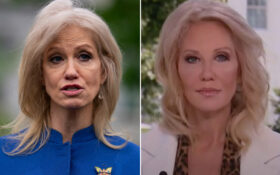 White House Counselor Kellyanne Conway is used to getting double-takes from the media over her words.

But now critics are surprised by her looks.

Pundits are saying she’s had a full makeover after noting a Fox News segment showed her glowing facial features — from forehead to cheeks to full lips.

Some raved about the new-look Conway.

A New York Magazine headline read, “Kellyanne Conway, is that you?”

“Conway has altered her appearance for television before, but this instance was particularly dramatic,” the magazine added.

You can view a before and after photo — courtesy of New York Post — below:

Conservative opinion writer Jennifer Rubin pondered whether or not Conway has been preparing to transition into a Fox News role.

“WTF?” she questioned on Twitter. “Getting ready for Fox News gig?”

Although analysts have noted that it’s very usual for politicians to have work done, or change their appearance, she still heard some scrutiny for the timing of her supposed renovation — especially from the liberal media.

“More surprising than Conway’s appearance, however, was her decision to make such a drastic change now, of all times, during a national pandemic and watershed civil-rights movement,” NYMag wrote.

” … in this moment, it’s dangerous for anyone to get a haircut, let alone a facelift.”

“There’s also an expectation for leaders and their representatives to display a sense of respect and somberness in public.”

Lost in this all though, was the fact that Conway appeared on Fox News in the first place to talk about President Donald Trump’s executive order on police reform.