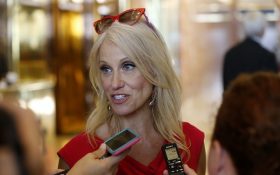 Trump Delusion Syndrome is real. It’s getting worse. And now, CNN is implying that women associated with Trump have it coming to them.

White House counselor and President Donald Trump’s former campaign manager Kellyanne Conway told CNN that last October she was assaulted by a “deranged” woman while with her young daughter and her daughter’s friends.

Conway says she was dining at Mexican restaurant Uncle Julio’s in Maryland when she was attacked by the woman, who was screaming about Trump’s policies and shaking her.

In an interview with CNN, Conway described the attack as “unhinged.”

“She was out of control. Her whole face was terror and anger.”

“I was standing next to my daughter and many of her friends at dinner and she was right here, right next to me,” Conway said. “And her friends were too. And somebody was grabbing me from behind, grabbed my arms and was shaking me to the point where I thought maybe somebody was hugging me, one of the other parents coming to pick his or her daughter up.”

Then it got serious.

“And then as I turned around it just felt weird, it felt like that’s a little aggressive,” Conway said. “I turned around and the woman had grabbed my hand.”

“She put her hands on me and was shaking me, and then was doing it from the front with my daughter right there who then videotaped her.”

The alleged attacker, Mary Elizabeth Inabinett, has since been charged with second degree assault. CNN reports that she expects to plead not guilty. She is due in court next month.

“She ought to pay for that,” Conway said. “She has no right to touch anybody.”

Conway is just another victim in a long list of attacks and harassment incidents against White House staffers and conservatives.

It has lead pundits in conservative circles wonder whether it’s truly safe for White House employees to go out in public, not to mention out with their families.

Shockingly, CNN’s Dana Bash implied that Trump’s “divisive rhetoric” was to blame for the attack.

Of course, Conway rejected that idea, and said the responsibility lies only on the alleged attacker.

Could you imagine the backlash if a conservative news star asked a female Obama official that said she was assaulted, “Don’t you think you were asking for it?”

First on CNN: Kellyanne Conway describes alleged assault by “out of control” woman at a restaurant in October. The woman denies the charge. https://t.co/lv6pUIg8UU pic.twitter.com/oHVb1IsucZ