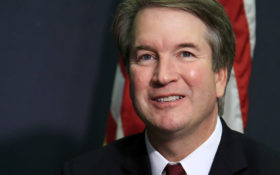 Supreme Court Justice Brett Kavanaugh is turning down the nearly $600,000 raised for him after sexual harassment allegations were leveled against him during his confirmation process.

According to the creator of his GoFundMe page, Kavanaugh is declining the money raised to support him — and asked that it go to charities instead.

In honor of the judge and his family, the donations will be donated to the Archdiocese of Washington, which runs the Catholic Youth Organization (CYO) where Kavanaugh used to coach girls’ basketball.

As Kavanaugh was defending himself against uncorroborated allegations of sexual misconduct, thousands of his supporters were raising funds for his family to get through the difficult time.

On Tuesday, conservative blogger John Hawkins who launched the GoFundMe page wrote, “I’ve spoken to a former clerk for Judge Kavanaugh who told me that Kavanaugh’s supporters loved the outpouring of support from this GoFundMe.”

Hawkins explained that Kavanaugh be involved in the process of distributing the money, or choosing an organization for it to be donated to. Instead, Hawkins decided he will donate the funds to an organization near and dear to Kavanaugh.

According to Hawkins, the Archdiocese of Washington thought “the best way to use the funds to help the sort of kids Brett Kavanaugh has been working with” was to “split the money between three of their programs: The Catholic Youth Organization (CYO), the Tuition Assistance Fund, and the Victory Youth Center.”

In an interview with Yahoo!, Hawkins explained that he created the GoFundMe page for Kavanaugh after having a conservation with a woman who noted that Kavanaugh’s accuser, Christine Blasey Ford had donation pages set up in her name.

“She was like, ‘Christine Blasey Ford has these GoFundMes up; I wish someone would do a GoFundMe for Brett Kavanaugh” Hawkins said.

“So I figured, hey, let’s do a GoFundMe — and that’s actually how it got started, as crazy as that sounds,” Hawkins concluded.

The Horn News reported on Tuesday that Ford “is set to cash out nearly $1 million from crowd-funding efforts.”

Democratic leaders have claimed that Ford had “nothing to gain” from her uncorroborated allegations leveled against Kavanaugh, but her hefty payday hints at another story.