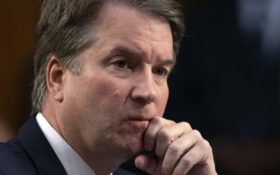 Christine Blasey Ford may testify against Supreme Court nominee Brett Kavanaugh after all, her attorney said, bringing new life into the prospect of a dramatic Senate showdown next week over Ford’s accusation that he assaulted her when they were in high school.

The preference would be for Ford to testify next Thursday, and she doesn’t want Kavanaugh in the same room, her attorney told Judiciary Committee staff in a 30-minute call that also touched on security concerns and others issues.

Ford is willing to tell her story to the Judiciary Committee — but only if agreement can be reached on “terms that are fair and which ensure her safety,” the attorney said in an email earlier Thursday. In the call, she said Ford needs time to secure her family, prepare her testimony and travel to Washington.

The discussion revived the possibility that the panel would hold an electrifying campaign season hearing at which both Ford and President Donald Trump’s Supreme Court nominee could give their versions of what did or didn’t happen at a party in the 1980s. Kavanaugh, now a judge on the powerful U.S. Court of Appeals for the District of Columbia Circuit, has repeatedly denied her allegation.

Judiciary Chairman Chuck Grassley, R-Iowa, has scheduled a hearing for Monday morning, and he and Senate Majority Leader Mitch McConnell, R-Ky., have indicated it would be Ford’s only chance to make her case. Republicans are anxious to move ahead to a vote by the committee, where they hold an 11-10 majority, and then by the full Senate, which they control, 51-49.

Taylor Foy, spokesman for Republicans on the panel, said after the call that Grassley “will consult with his colleagues on the committee. He remains committed to providing a fair forum for both Dr. Ford and Judge Kavanaugh.”

Attorney Debra Katz said anew that Ford, 51, a psychology professor in California, has received death threats and for safety reasons has relocated her family.

“She wishes to testify, provided that we can agree on terms that are fair and which ensure her safety,” Katz wrote in the email.

In the call later Thursday, Katz asked the committee to subpoena Mark Judge, whom Ford has named as the other teen in the room at the time. Judge has told the committee he does not recall the incident and does not want to speak publicly.

Should Ford testify, especially in public, it would pit the words of two distinguished professionals against each other as television close-ups capture every emotion. Assessing them would be not just the committee’s 21 senators —only four of whom are women, all Democrats — but also millions of viewing voters.

Underscoring the sensitivity of all-male GOP senators grilling a woman who’s alleged abuse, Republicans are considering reaching out to female attorneys who might question Ford.

Kavanaugh, who’s been eager to testify, said he was ready to appear Monday.

“I will be there,” he wrote Grassley in a letter. “I continue to want a hearing as soon as possible, so that I can clear my name.” Kavanaugh was spotted at the White House on Thursday.

Trump, who has been careful in recent days not to criticize Ford as he defends his nominee, told Fox News host Sean Hannity Thursday that he feels the nomination has been delayed long enough.

“I think it’s a very sad situation,” he said, asking, ‘Why didn’t somebody call the FBI 36 years ago?… What’s going on?”

He said Kavanaugh’s accuser should “have her say and let’s see how it all works out, but I don’t think you can delay it any longer. They’ve delayed it a week already.”

At a Las Vegas rally not long after, Trump praised Kavanaugh as “one of the finest human beings you will ever have the privilege of knowing or meeting” and called his reputation “impeccable.”

Grassley has said that in the interest of making Ford comfortable, he’d be willing to let Ford testify in public or private. He even offered to send committee aides to her California home to take testimony.

Sen. Susan Collins, R-Maine, said it would be “unfair” to Kavanaugh if Ford decides to not appear, and others were urging leaders to proceed quickly to a vote. Still, the bare 51-49 Republican majority means they can lose just one vote and still approve him if all Democrats vote no. Vice President Mike Pence would break a tie.