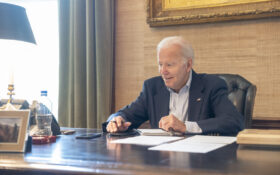 President Joe Biden, 79, tested positive for COVID-19 on Thursday — a potentially serious illness for the elderly.

One reporter, George Condon of the National Journal, attended a press conference hosted by Jean-Pierre. The reporter grew tired of hearing updates from the president’s communications staff. He demanded to hear from Presidential Physician Dr. Kevin O’Connor.

“Let me follow on Dr. O’Connor,” the reporter said.

“[You haven’t] seen the president today. [You aren’t] treating the president. The question is — when will Dr. O’Connor come out? Because to just put out a statement and shield him from questions would be the least transparency of any White House in 50 years on a presidential illness.

“Wow! I wholeheartedly disagree on your last statement,” Jean-Pierre responded.

He’s having, again, mild symptoms and is able to work from home. I think, I believe we believe [in]  getting direct information, pretty much detailed information from this letter that we, in a transparent way, shared with all of you on how he’s doing. And we have committed to do that every day.

Jean-Pierre then moved onto the next question. She failed to address the possibility of releasing Zoom recordings between the president the presidential physician.

Biden and his doctor can follow C.D.C. guidelines while still communicating with the American people. Biden himself claims to be participating in Zoom meetings anyway, and he recorded a video after his positive test result yesterday.

Karine Jean-Pierre was NOT happy when National Journal's George Condon said "shield[ing] him from questions would be the least transparency of any WH in 50 years on a presidential illness."

KJP: "Wow. I wholeheartedly disagree…We are doing this very differently" from Trump pic.twitter.com/zrkbHQQQYV

Folks, I'm doing great. Thanks for your concern. Just called Senator Casey, Congressman Cartwright, and Mayor Cognetti (and my Scranton cousins!) to send my regrets for missing our event today.

An update from me: pic.twitter.com/L2oCR0uUTu

“You have to love the fact that Jean-Pierre found a way to bring Donald Trump into the conversation,” one columnist wrote at TownHall.com. “That man continues to live rent-free in the minds of everyone in the Biden administration. What a weak, desperate attempt at deflection!”

Trump and Biden both contracted COVID-19 while in office. Each of them has received both a full vaccine and at least one booster shot.

They each posed for similar photos during their bouts of corona. “When a president gets covid they take away his tie and make him do paperwork,” one Twitter user joked.

When a president gets covid they take away his tie and make him do paperwork pic.twitter.com/Fl023PiwYd

Folks, I'm doing great. Thanks for your concern. Just called Senator Casey, Congressman Cartwright, and Mayor Cognetti (and my Scranton cousins!) to send my regrets for missing our event today.

According to White House statements, Biden has been taking Paxlovid: an antiviral drug for treating coronavirus.

All Americans can take Paxlovid at no upfront cost. However, patients need a prescription for this drug, and so they may need to pay for a screening by either a pharmacist or a physician.

Biden has yet to appear in a public video with his doctor.

Rather, Biden is still releasing statements and sending Jean-Pierre to do his own work.