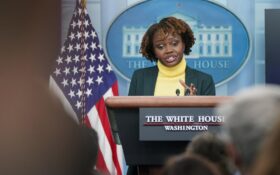 President Joe Biden has been experiencing a P.R. crisis over mishandling classified documents… but his P.R. staff doesn’t appear to be helping.

White House press secretary Karine Jean-Pierre was addressing the search for the documents during a press conference Thursday. She repeatedly referred to the search as “completed” as of Wednesday night.

Then on Saturday, the White House acknowledged another trove of documents found Thursday night, just hours after Jean-Pierre’s press conference.

In fact, at six different times Jean-Pierre had described the search as over. She even told a reporter, “You should assume that it’s been completed.”

“After the search concluded last night, we released a statement disclosing the facts from that search, as you all know, this morning. This is all part of the Justice Department process,” Jean-Pierre went on. “As soon as the President’s lawyers found these documents, they immediately contacted Archives and Department of Justice, as I’ve said many times already, to ensure that they were handled properly, but that search was completed last night.”

Jean-Pierre kept referring reporters to a press release issued by the president’s team. “I can just refer you to what his team said: The search is complete. He is confident in this process. And I will leave it there,” she said. “As you saw in our statement, the documents that were found last night — right? — they completed the search with documents being found last night.”

Take a look at this compilation from the Daily Mail —

Another reporter asked about another possible search, but Jean-Pierre referred the reporter to the president’s statement.