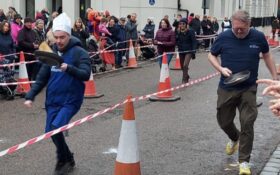 A woman from Liberal, Kansas, is this year’s champion of the traditional Pancake Day Race against women in Olney, England.

Whitney Hay won the U.S. leg of the race in Liberal on Tuesday with a time of 1:07, KSNW-TV reported. That beat Katie Godof of Olney, England, who ran her race in 1:10.

The race returned after a hiatus in 2021 because of the coronavirus pandemic.

Hay, a 21-year-old college student, also won the Liberal race in 2020 but lost to Olney that year.

Contestants must carry a pancake in a frying pan and flip it at the beginning and end of the 415-yard (380 meter) race. The event began in Olney in the 15th century. In 1950, Liberal challenged Olney to an international competition.

The crepe-like pancakes are traditionally eaten in the United Kingdom on Shrove Tuesday, the start of Lent.

Olney in Buckinghamshire, is about 60 miles (100 kilometers) northwest of London. Liberal is in southwest Kansas, just north of the Oklahoma state line and about 200 miles (320 kilometers) west of Wichita.