Kansas oil pipeline roars back to life - The Horn News 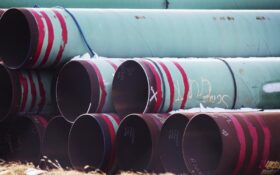 A pipeline operator put a damaged section in Kansas back into service Thursday, a little more than three weeks after a spill dumped 14,000 bathtubs’ worth of crude oil into a rural creek.

Canada-based T.C. Energy announced that it had completed repairs, inspections and testing on its Keystone pipeline in northeast Kansas to allow a “controlled restart” of the section from Steele City, Nebraska, near the Kansas line, to Cushing, in northern Oklahoma. The 2,700-mile (4,345-kilometer) Keystone system carries heavy crude oil extracted from tar sands in western Canada to the Gulf Coast and to central Illinois.

A spill on Dec. 7 shut down the Keystone system after dumping 14,000 barrels of crude oil into a creek running through rural pastureland in Washington County, about 150 miles (240 kilometers) northwest of Kansas City. Each barrel is 42 gallons, the size of a household bathtub.

The U.S. Department of Transportation’s pipeline safety arm gave TC Energy permission last week to restart the section of pipeline after telling the company that it would have to operate it at lower pressure than before. The company’s announcement disclosed that it still is working to determine the cause of the spill.

“We recognize that incidents like this raise questions. We have questions too. We are committed to asking those tough questions, fully investigating and sharing our learnings and actions,” Richard Prior, the company’s president for liquids pipelines, said in an online message.

The rupture occurred on local farmer Bill Pannbacker’s land, and he said he’s bothered the company reopened the section of pipeline when “they haven’t at least given an official cause” of the accident.

The company reported that as of last week, it had recovered almost 7,700 barrels of the spilled crude oil, or a little more than half. The company and government officials have said drinking water supplies were not affected. No one was evacuated, and most of the Keystone system was back in operation in eight days.

“We will not rest until we have recovered and remediated the areas affected by this incident,” Prior said in his message. “No incident is ever acceptable to us.”

The spill was the largest onshore in nine years and larger than 22 previous spills on the Keystone system combined, according to U.S. Department of Transportation data.

“If previous tests showed that everything was fine and now tests show everything is fine, yet we’ve had failures in between-time, what real assurance do we have that there is not another accident waiting to happen?” said Zack Pistora, who lobbies for the Sierra Club’s state chapter.

Concerns that spills could pollute waterways spurred opposition to plans by TC Energy to build another crude oil pipeline in the same system, the 1,200-mile (1,900-kilometer) Keystone XL, across Montana, South Dakota and Nebraska. President Joe Biden’s cancelation of a permit for the project led the company to pull the plug on the project last year.