Kamala Harris won't like this video at all - The Horn News 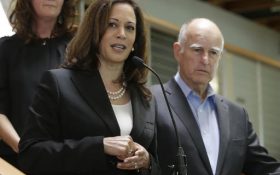 Two buses of illegal immigrants from the U.S.-Mexico border were dropped off near Vice President Kamala Harris’ home in residential Washington on Thursday morning in the bitter political battle over the Biden administration’s failed border policies.

Texas Gov. Greg Abbott has been busing illegals out of Texas to cities with Democratic mayors as part of a political strategy this year because he claims there are too many arrivals over the border to his state. Arizona Gov. Doug Ducey also has adopted this policy, and Florida Gov. Ron DeSantis also got in on the act recently. It was first dreamed up by former President Donald Trump.

Abbott tweeted that he’d sent the buses that arrived Thursday: “We’re sending migrants to her backyard to call on the Biden Administration to do its job & secure the border.”

One illegal immigrant dropped off at the Harris resident said he believed the U.S. border was “open.”

About two dozen men and women stood outside the U.S. Naval Observatory at dawn, clutching clear plastic bags of their belongings carried with them over the border, before moving to a nearby church. Harris’ office had no immediate comment.

After illegal immigrants seeking asylum cross the U.S.-Mexico border, they spend time in a U.S. Customs and Border Protection facility along the border until they are generally released into the U.S. to wait out their cases. Republicans say Biden’s policies encourage these migrants to vanish into the U.S., because many never show up for their cases.

Instead they vanish into these red states like Texas, Florida, and Arizona and are never heard from again.

District of Columbia Mayor Muriel Bowser declared a public emergency last week over the continued arrival of buses of migrants. The district earlier requested National Guard assistance to help stem a “growing humanitarian crisis” prompted by the arrival of thousands of illegal immigrants, but the Pentagon rejected the request.

BREAKING: Two buses of 101 migrants mostly from Venezuela arrive outside @VP Harris house in DC sent by @GregAbbott_TX – one migrant telling me he believes the border is “open” @FoxNews pic.twitter.com/Q70utdE4k0