Kamala Harris ridiculed for this "train wreck" - The Horn News 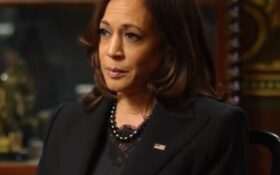 On Thursday, Vice President Kamala Harris spoke about the pandemic on NBC’s The Today Show. She was widely panned for her empty bloviating, with some critics calling it a “train wreck.”

“It is time for us to do what we have been doing,” our vice president said. “And that time is every day.”

The vice president went on NBC, in part, to defend the president’s recent, divisive speech about election security and ballot access. However, NBC’s Craig Melvin began the interview by asking her about the omicron variant.

Melvin noted, “It’s been several weeks now since public health experts have acknowledged that cloth masks, surgical masks are not as effective in terms of stopping this new variant, omicron. Should Americans be wearing KN95 masks or N95 masks?”

Some masks have earned certifications like “KN95” or “N95” after being shown to seal more tightly around the face.

Harris responded, “Well, the CDC is going to be providing us with those guidelines,” and Melvin interrupted, “What’s taking so long?”

Harris continued, “Well, the CDC is making their decisions. I don’t make the CDC’s decisions. But what I will say is what has been clear about masks is — You want to wear a tight-fitting mask. That is clear, and we want to urge everybody to do that. In terms of the N95 masks, they are available. There is a stockpile of, I believe, over 700 million of those masks. So, the supply is there as necessary and as needed.

Then Melvin asked a hardball question, and Harris degenerated into nonsense.

At what point does the administration say, “You know what? This strategy isn’t working. We’re going to change strategies”?… Is it time?

“Every day it is time for us to agree that there are things and tools that are available to us to slow this thing down,” she said.

i knew it sounded familiar pic.twitter.com/SWyJu7WxCG

“My trip . . . was about addressing the root causes,” Harris said in a news conference last year.

“The stories that I heard and the interactions we had today reinforce the nature of these root causes. . . . So the work that we have to do is the work of addressing the cause—the root causes.”

In her lack of focus, Harris is starting to resemble her boss, President Joe Biden: a man described as “a parody of a bloviating politician” by CNN’s Jeffrey Toobin in 2007.

Maybe the White House really is the “Biden-Harris administration.”

“I don’t believe in giving up on people.”

Watch @craigmelvin’s full interview with @VP Kamala Harris on the state of COVID-19 in the United States, opposition to voting rights legislation in the Senate, the 2024 election and more. pic.twitter.com/5hUlCfQEoC