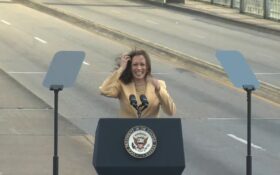 Vice President Kamala Harris, the nation’s border czar, has been presiding over a humanitarian crisis at the border with Mexico. In June 2021, she apparently tried to solve the border crisis by simply telling would-be migrants, “Do not come.”

On Thursday, Harris traveled to a very different border… but she made a very similar gaffe.

Harris was speaking at the Korean peninsula’s demilitarized zone (DMZ), the border between socialist North Korea and democratic South Korea.

Harris began, “So, the United States shares a very important relationship, which is an alliance with the Republic of North Korea.”

There’s no alliance between the U.S. and North Korea. In fact, there’s not even such a country as “the Republic of North Korea.”

KAMALA HARRIS: "The United States shares a very important relationship, which is an alliance with the Republic of North Korea." pic.twitter.com/H2dI5UYOlo

Harris also repeated the word “ironclad” awkwardly, and she appeared to say “report” instead of “repeat.”

“Our shared goal — the United States and the Republic of Korea — is a complete denuclearization of the Korean Peninsula. They are committed to working in solidarity around a shared purpose and goal, which is to maintain the security and the stability of this region of the world,” Harris said after meeting with Yoon.

“In the south, we see a thriving democracy, innovation, economic prosperity, and strength, a powerhouse — dare I say — on many of these issues, and a force for good in the world. In the north, we see a brutal dictatorship, rampant human rights violations, and an unlawful weapons program that threatens peace and stability.”

Earlier this month, The Horn News reported on Yoon allegedly cursing at President Joe Biden over a hot mic.

Harris has become known for her misstatements and for her awkward, repetitious wording. In March, she mistakenly referred to Ukraine as a member of NATO. Then she went viral earlier this month for saying, “Community banks are in the community.”