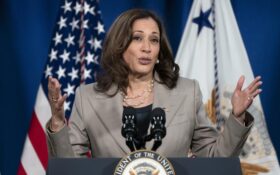 Vice President Kamala Harris was speaking about the viral photos from the James Webb Space Telescope… and she made another one of her characteristic gaffes.

Still, she’s amassed a small crowd of loyalists to defend her.

Speaking on Friday at the Chabot Space and Science Center, Harris said, “With the exploration of space being defined in the 20th century, we know that living in this century we must think about where we now stand and where we must go. So while it was defined quite well in the 20th century, the opportunity of space must guide our work.”

She faced criticism for making an obvious remark, using the ambiguous phrase “the opportunity of space” and awkwardly repeating the word “century.”

I think she's referring to the huge opportunity of space between her ears.

In past speeches, Harris has tended to repeat certain buzzwords, like “working together” and “the passage of time.”

On Saturday, Harris used the word “century” six times in one speech.

“At the turn of the century, there was a technological revolution. Wilbur and Orville Wright made their first flight. And in the span of a single lifetime, our nation went from the sands of Kitty Hawk to the surface of the Moon,” Harris said. “To that end, we understand that we have got to update the rules, because they’re just simply outdated.  They were written for a space industry of the last century.”

Despite all these gaffes, Harris finds herself with slightly higher approval ratings than usual. In FiveThirtyEight’s poll average, she finds herself polling at 37.6 percent approval, up from last year’s embarrassing low of 28.9 percent.

Plus, Harris energized some of her defenders this weekend.

On Sunday, The Daily Beast reported on the declining visibility of the vice president’s supporters, the #KHive. The article went viral on Twitter after swarms of dismissive messages from Harris’ most hardcore supporters.

The Daily Beast received a “ratio,” which occurs when a Twitter user receives more replies than likes.

The ratio you’re about to catch is proof that the central premise of your article is wrong. Why hasn’t @scottbix tweeted this out on his main account? What’s he afraid of?

Despite retaining some number of rabid fans, Harris is polling well behind other executives like President Joe Biden and Transportation Secretary Pete Buttigieg.

Gaffe by gaffe, Harris is chugging along in the approval polls, but she’s chugging near the bottom.