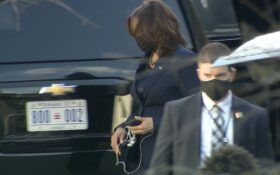 Vice President Kamala Harris seems extra vigilant about security, according to a Monday report from Politico.

She made headlines for one particular habit: her strange preference for wired headphones.

However, Harris claims she sticks with wired headphones for security reasons.

Harris has worn the old faithful headphones during her television appearances. In one viral video, Harris called then Joe Biden, then the president-elect, to say, “We did it, Joe!” She was clutching her headphones during that call.

We did it, @JoeBiden. pic.twitter.com/oCgeylsjB4

Harris has long preferred texting over email, a Senate campaign aide told Politico. During her tenure as California’s attorney general, she asked her guests to wait outside her office before meetings instead of allowing them inside, another former aide told the publication, because of unnamed security concerns.

Some staffers described these precautions as cautious, prudent, and vigilant. Other staffers have described them as the crankish, paranoid habits of someone that’s misinformed.

Still, Politico concluded, “Caution and vigilance has [sic] not stood in the way of Harris’ meteoric rise to the vice presidency.”

Politico asked Harris for any “fun origin story” to her headphone habit, but the publication received no response.

Some journalists have dismissed the Politico report as the result of a slow news day. Even the writers themselves joked about the silliness of the story. They wrote in the report, “Should someone who travels with the nuclear football be spending time untangling her headphone wires? The American people deserve answers!”

Harris supporters say this degree of media attention on her old habits is sexist, despite Biden’s constant gushing about “the Biden-Harris administration.”

This, of course, ignores that the Harris team has created many of its own P.R. problems due to its high turnover rate. Over and over again, the vice president’s office has demonstrated its ineptitude at damage control.

On Sunday, in an effort to tamper down rumors of chaos, one staffer tweeted, “I work for Vice President Harris on behalf of the American people as Deputy Director for Operations and absolutely love my job.”

He was mocked for his stiffness in this tweet.

The vice president’s career has survived her high standards for security. Now it needs to survive these issues with staffing and P.R.

Hi. My name is David Gins. I work for Vice President Harris on behalf of the American people as Deputy Director for Operations and absolutely love my job.

Just thought some of you should know ???? pic.twitter.com/VPuYv9bpbp

Some people say that December is a slow news month. I don't know what they're talking about.

I have heard hundreds of political staffers vent about their boss.

I have only seen such venting covered as news when the boss is a woman.