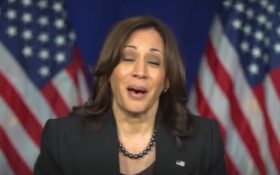 Vice President Kamala Harris has followed an unlikely path. She pursued a career in law enforcement, but she was raised by a Marxist academic.

Even while serving as vice president, Harris occasionally shows her roots as a California hippie. Earlier this month, she went viral for a loopy rant about Venn diagrams.

“You agree with me, right?” Harris said, laughing. “I brought props!”

Regarding the video, one Twitter user said, “She is on the most divine pharmaceutical cocktail known to man.”

Another said, “Sending this video to my psychiatrist and therapist with the message ‘let’s aim for this.'”

Sending this video to my psychiatrist and therapist with the message “let’s aim for this” https://t.co/zbW76UUt9D

It gets worse. The vice president was babbling about Venn diagrams long before her viral moment. For much of her time in D.C., she’s been fixating on these overlapping circles.

“Remember Venn diagrams,” Harris said in a previous video, while waving her hands in circles. “And let’s just see where they overlap.”

One viewer made a Venn diagram specifically for Team Harris.