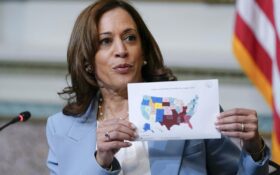 In the past, Vice President Kamala Harris has gone viral for gushing about her esoteric interests, like Venn diagrams.

Earlier this month, Harris continued the pattern. She ranted about another one of her interests: school buses.

During a panel on energy, Energy Secretary Jennifer Granholm asked Harris,  “What is the technology that you are excited about?”

Harris said, in front of an applauding crowd. “So much of that — I mean, how could you not be excited, especially if you listen to Jennifer Granholm? I — you know, what also excites me, when I — among the many things? I’m excited about electric school buses.”

Oddly enough, Harris had made a similar remark in October.

Then again, Harris has amassed a history with buses. At a presidential debate in 2019, she slammed rival candidate Joe Biden for his stance on federally mandated busing in the 1970s. During that same campaign, she went viral for marveling at her campaign’s bus.

Kamala Harris is excited about her new bus pic.twitter.com/FvJ8t07gvp