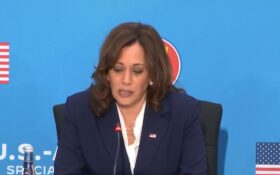 On Wednesday, Texas Gov. Greg Abbott sent a bus of migrants to D.C.’s Naval Observatory, the home of Vice President Kamala Harris. Abbott has been sending these buses intermittently since April.

After the first buses, D.C. Mayor Muriel Bowser claimed to be overwhelmed, and she demanded aid from FEMA.

However, Washington seemed ready this time. A nonprofit called SAMU greeted the migrants immediately, gave them necessities and loaded them into vans for the next stage of their journey.

The previous buses reportedly contained migrants from Venezuela, but these migrants were from Nicaragua, according to reporting from NBC News. In other words, they likely fled violence in their home country, approached the border, asked for asylum and began waiting in Texas during the application process.

The governor has said that he wants the Biden administration to acknowledge the needs of the border communities trying to accommodate the asylum seekers.

Abbott has send more than 8,400 migrants to D.C. in total, according to his website. He’s sent the buses not only to the Naval Observatory, but also to D.C.’s Union Station.

“By busing migrants to Washington, D.C., the Biden Administration will be able to more immediately meet the needs of the people they are allowing to cross our border,” Abbott said in a statement in April, shortly after sending the first bus.

“As the federal government continues to turn a blind eye to the border crisis, the State of Texas will remain steadfast in our efforts to fill in the gaps and keep Texans safe.”

The migrants that arrived today were immediately met by volunteers from SAMU First Response, who triaged their needs and travel plans before loading them into vans heading to their organization’s respite to help them plan next steps. pic.twitter.com/hRYjc86iI2