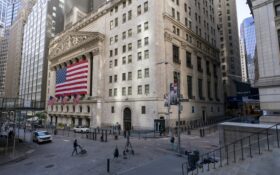 Congress always seem to find a way to make themselves rich, even when everyone else is suffering.

Prices are up everywhere from the store to the gas pump, and it seems like store shelves today are as bare as they were during the 70s in the Soviet Union.

But even while our economic life grinds us down to desperation, congressional leaders went on a nine-figure stock spending spree, enriching themselves by buying and selling stocks that respond to their decisions — and even managing to beat most financial experts.

Some people accuse them of “insider trading.” But at least now we can put a dollar figure on how much possible corruption and double-dealing is taking place under the Capitol Rotunda.

A political watchdog group combed through all the official stock transaction records and found out congressmen had engaged in $290 million worth of stock trades in 2021—and on average, they beat the market.

Almost all of them did better than the average investor… almost as if they had some kind of edge or some special knowledge that the typical American doesn’t have.

All in all, 105 members of Congress engaged in $290 million of trade in more than 3,500 stock transactions.

That means only one out of every five congressmen trades in individual stocks, while voting on bills that affect those stocks’ values—but the ones who do are making a killing.

In all, 35 members of Congress outperformed the market.

And while Republicans and Democrats may not agree on much, they agree on gouging themselves on stocks. The stock trades have been a bipartisan cash cow: 19 Democrats and 16 Republicans beat the average return.

The man with the highest returns is Independent Sen. Angus King of Maine, who caucuses with the Democrats. He beat the bull market by a staggering 16.5 percent. As a party, Senate Democrats beat the S&P 500 index fund average the most, with their stocks beating the market by 15.4 percent. Next came members of the House in both parties, whose returns came in 14.7 percent above the average. Senate Republicans beat the market by just under 13 percent—still, nothing to sneeze at.

I have just released the full trading report on politicians in 2021.

In short, many beat the market.

They traded more than ever before.

And they made numerous unusually timed trades, resulting in huge gains.

Others, like Senator Tommy Tuberville, R-Ala., made huge purchases of stocks related to infrastructure just as the Senate was about to vote on the trillion-dollar infrastructure plan.

But the Democrat who did best in the market was none other than Speaker of the House Nancy Pelosi. Pelosi has also been the most outspoken member of Congress in favor of letting herself and her colleagues buy low and sell high after they get briefings on national political secrets.

What are they buying? In congressional stock trades, “tech and industrials (oil and gas) reign supreme,” according to the report released by a group called Unusual Whales.

Over the last year, gas and oil prices have shot up by 50%—thanks to Biden administration policies that stamped out U.S. energy independence and stopped exploration of our natural resources—members of Congress bought up oil and gas stock.

Does that sound like the work of a party that wants to “end our reliance on fossil fuels”? Or does it sound like grifters and gougers engaging in a little insider trading?

They also bet big on Microsoft—especially Democrats, who bought $34.5 million of stock in Bill Gates’ company.

Congress also invested deeply in gigantic corporate tech overlords like Google, Facebook, PayPal, and other tech sector stocks… as some leaders locked down their populations (supposedly to “flatten the curve”) and the Biden administration thought about going back to virtual schooling for U.S. schoolchildren.

You might say Congress benefits by keeping you locked in your home and dependent on the tech companies they own.

Georgia Republicans lost two Senate races last year presumably because of allegations about insider trading, especially related to Kelly Loeffler, but since then not much has changed legally.

Sens. Josh Hawley, R-Mo., and Jon Ossoff, D-Ga., say they are working on a bill that would turn a ban into law.

There are two House bills—each with bipartisan support—that would ban individual stock trades by congressmen and their immediate family members, or that would require congressmen and their families to put their stocks into a blind trust, so they don’t know what they own—and can’t pass legislation to favor their own financial interests.

But so far, neither one has gotten out of committee.

And it’s not like President Biden can get on a high horse about it, considering his son Hunter’s sordid history.

But at least with this report, we know who “our” elected leaders are really looking out for…

No one but themselves.