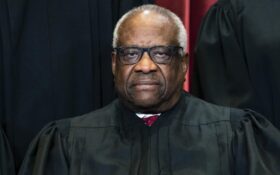 Nearly one week after being hospitalized and needing intravenous antibiotics to help fight an infection, the Supreme Court declined to say Wednesday whether 73-year-old Thomas remains in the hospital.

It was reported earlier this week that Thomas had been expected to be released from care by Tuesday evening.

The court said Sunday that Thomas had been admitted to Sibley Memorial Hospital in Washington on Friday after experiencing severe “flu-like symptoms,” and he was diagnosed with an infection.

His “symptoms are abating,” and he was expected to be released Monday or Tuesday, the court said in a statement at the time. But on Wednesday morning, court spokeswoman Patricia McCabe said she had no update to provide.

The court heard arguments Wednesday morning and Chief Justice John Roberts said, as he has for the past two days, that while Thomas was not present he would participate in the case by reviewing the arguments’ transcript and briefs. Roberts said Thomas was “unable to be present today” without explanation.

Thomas did not have COVID-19, the court has said.

The secretiveness of Thomas’ health is fairly standard when it comes to the Supreme Court, experts told Vanity Fair. In 2004, then-Chief Justice William Rehnquist was visibly sick and went absent from the court, but the public wasn’t kept informed on his illness. It was only later revealed that Rehnquist was battling thyroid cancer, which he died of a year later.

The late Justice Ruth Bader Ginsburg was an exception, experts said. Ginsburg made public her numerous battles with cancer until her death in late 2020.

Thomas, a conservative and appointee of former President George H.W. Bush, has been on the court since 1991.