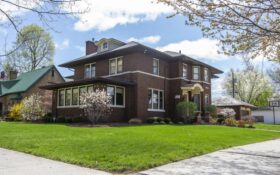 U.S. Supreme Court Justice Amy Coney Barrett and her husband have sold their northern Indiana home to a University of Notre Dame professor as their large family prepares for a move to the Washington, D.C., area.

Jesse Barrett said he and the couple’s seven children plan to join Coney Barrett in the Washington area in time for the start of the coming school year, leaving their longtime South Bend home behind.

“I’m sure their name certainly did not hurt (the property’s appeal), but the market is very strong,” McCullough told the South Bend Tribune.

Jesse Barrett said moving the family from South Bend is difficult for he and his wife, who have seven children, two of whom were adopted from Haiti.

“Six of our babies came home either from a hospital or from an international adoption to that house, so there’s just so many wonderful memories,” he said.

Jesse Barrett, a former federal prosecutor who is a partner with a South Bend-based law firm, said he wasn’t certain where or how he would practice law in the D.C. area. He worked at national law firm Sidley Austin in Washington from 2000 to 2002 and has renewed his membership in the D.C. bar.

Coney Barrett, 49, was approved last fall by the then- Republican-led Senate just weeks after the death of Justice Ruth Bader Ginsburg, the court’s most prominent liberal. Coney Barrett’s addition to the high court gave it a 6-3 conservative majority.