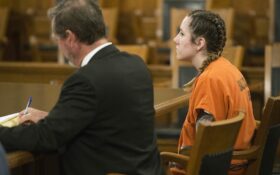 A jury found a woman guilty Wednesday of the killing another woman who disappeared after a Tinder date and whose dismembered remains were later found in trash bags along rural Nebraska roads.

Boswell’s defense had argued she was forced by her boyfriend to go along with the killing and dismemberment, but state prosecutors said Boswell acted in tandem with Aubrey Trail, 54, to meet and kill Loofe.

Boswell could become the first woman sent to death row in Nebraska when she’s sentenced at a later date. Trail was found guilty last year and also faces a possible death penalty.

Investigators say Boswell arranged a date with Loofe, a Lincoln store clerk, through the dating app Tinder for Nov. 15, 2017 — the same day officials say Loofe was killed. Loofe was reported missing by her family, and a massive search was launched. Her remains weren’t found until Dec. 4, when her dismembered body was found stuffed into garbage bags that had been dumped in a field near Edgar, about 90 miles (145 kilometers) southwest of Lincoln.