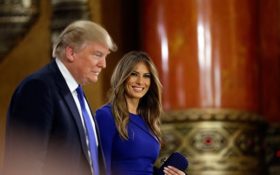 First Lady Melania Trump and her 11-year-old son Barron have been residing in New York City while they awaited for Barron to finish school.

But summer is here, and the two are finally ready to join Donald in the White House, making their official move to Washington D.C. on June 14th, people familiar with the planning told Politico.

Melania is the first first lady to delay her move to the White House, marking a modern twist on Trump’s already unique presidency.

In the recent weeks, Melania has been spending time at the White House preparing for her move. She has worked to create her East Wing staff and is in the process of preparing the house for her arrival.

As reports increase of stress building on Trump, Melania’s arrival is sure to cheer him up as he continues with his chock-full schedule.

Melania’s parents are also expected to increase their time spent in the White House. Victor and Amalija Knavs have been living with their daughter and grandson in the Trump Tower, helping to care for Barron, and while they won’t make the permanent move to D.C., their frequent presence is expected.

Michelle Obama’s mother lived in the White House during President Obama’s terms, helping to care for Malia and Sasha.

Melania has been increasing appearances leading up to the move, recently accompanying the president on his first over-seas trip, and attending fundraisers in Washington. Her move to Washington will only increase appearances as she continues to settle into her new role as first lady.