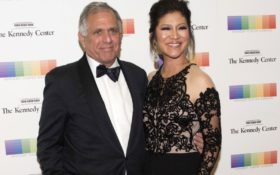 Julie Chen, wife of Les Moonves, was absent Monday but a central topic on “The Talk,” her talk show on the network, a day after a new round of sexual misconduct allegations brought the departure of the CBS chief executive.

In what was supposed to be a celebratory season premiere Monday for “The Talk,” its four other panelists walked out somberly without Chen, who acts as host and moderator and whose absence had not been announced.

Sharon Osbourne choked back tears as she spoke about Chen, who has an 8-year-old son with Moonves.

“As you all know, Julie’s husband is in the news,” Osbourne said. “And she’s taking off time to be with her family.”

Chen also hosts the prime-time reality show “Big Brother” on CBS, which is in its 20th season. She has been among the network’s most prominent personalities and public faces — especially with her added role of wife of the chairman and CEO.

In a statement, Chen said she would be off “The Talk” for a few days, but would be on “Big Brother” on Thursday. Her brief statement did not address the new allegations against her husband.

She publicly supported her husband after a first round of accusations last month.

Osbourne expressed love and support for her friend and co-host, a sentiment seconded by the show’s other three panelists, Sara Gilbert, Eve and Sheryl Underwood.

“Whatever times I’ve had of hardship over the last eight years, Julie has always been there for me,” Osbourne said. “It’s very embarrassing and upsetting to have to talk about her husband, but we feel it’s right.”

All four also expressed vehement support for the women who came forward about Moonves.

Osbourne said she had given a cautious statement of support for Moonves after the first round of allegations. But now she realizes “obviously, the man has a problem,” saying Moonves had broken the life of at least one of his accusers.

A total of 12 women have alleged mistreatment from Moonves in a pair of stories in The New Yorker, including forced oral sex, groping and retaliation if they resisted him. Moonves denied the charges, although he said he had consensual relations with three of the women.

They all came when Moonves was married to his first wife, Nancy Wiesenfeld, whom he divorced in 2004, the same year he married Chen.

An email to Chen’s manager Ken Slotnick about her status was not immediately returned.

Her co-hosts said they expect her to come back to “The Talk.”

“Julie Chen I know is a resilient woman,” Underwood said. “I think this is a blessing from God to be unburdened from secrets and unchained from lies.”