Judge decides the fate of Confederate statues in Charlottesville... - The Horn News 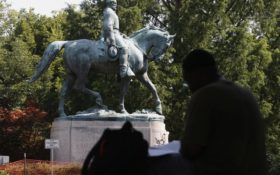 A Virginia judge has ruled that Charlottesville’s Confederate statues are war monuments protected by state law.

Judge Richard Moore’s ruling came in a lawsuit filed against Charlottesville City Council members who voted in 2017 to remove a statue of Gen. Robert E. Lee.

Moore cited how statues of Lee and Thomas “Stonewall” Jackson depict the men in military uniforms and on horses associated with them during the Civil War. Virginia law makes it illegal for local municipalities to remove war monuments without permission from the state.

Moore acknowledged the controversy that has surrounded Confederate statues in recent years, and said his ruling is limited to the question of whether the Lee and Jackson statues in Charlottesville fall under the definition of war memorials in Virginia law.

“While some people obviously see Lee and Jackson as symbols of white supremacy, others see them as brilliant military tacticians or complex leaders in a difficult time … and do not think of white supremacy at all and certainly do not believe in, accept, or believe in such. In either event, the statues to them under the undisputed facts of this case still are monuments and memorials to them, as veterans of the Civil War,” Moore wrote.

Moore said his ruling doesn’t guarantee that the plaintiffs will win if the lawsuit goes to trial. He said he still needs to rule on several pending issues, including the city councilors’ motion that they have immunity from the lawsuit.

The Monument Fund filed the lawsuit in March 2017, alleging that the council violated state law when it voted to remove the Lee statue. The lawsuit was later amended to also include the Jackson statue.

The statues have not been taken down.

Former City Councilor Bob Fenwick, a defendant in the lawsuit, told WCAV-TV he believes the council still has a good case to remove the statues.

“The important part is, does the council have legislative immunity, sort of like how a judge has judicial immunity so that the conclusions and the decisions that we make as councilors are final,” Fenwick said. “It was a lawful act that we did.”

Hundreds of white nationalists gathered in Charlottesville in August 2017 to protest the planned removal of the Lee statue. One woman was killed and dozens were injured with a self-avowed white supremacist drove his car into a crowd of people who showed up to demonstrate against the white nationalists.

James Alex Fields Jr., of Maumee, Ohio, was convicted of murder and other charges in state court. Fields pleaded guilty last month to federal hate crimes. He is awaiting sentencing.