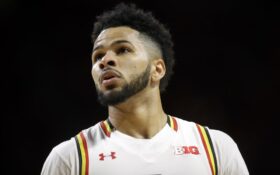 A federal judge has dismissed a lawsuit in which two former University of Maryland men’s basketball players accused makers of the “Fortnite” video game of misappropriating a dance move that the ex-teammates popularized.

Nickens and Brantley claimed the Cary, North Carolina-based company misappropriated their identities by digitally copying the “Running Man Challenge” dance that they performed in social media videos and on “The Ellen DeGeneres Show” in 2016.

Their copyright infringement lawsuit claimed the “Running Man” dance “emote” that Fortnite players can purchase for their characters is identical to the dance that Nickens and Brantley took credit for creating.

The judge said the key question is whether plaintiffs have a claim that is “qualitatively different” than the rights protected by the Copyright Act.

“And here Plaintiffs claim is based on Epic Games allegedly ‘capturing and digitally copying’ the Running Man dance to create the Fortnite emote that ‘allows the player’s avatars to execute the Running Man identically to Plaintiffs’ version.’” This is squarely within the rights protected by the Copyright Act,” he wrote.

Brantley, of Springfield, Mass., and Nickens, of Monmouth Junction, N.J., were seeking more than $5 million in damages.

Celebratory dances in Fortnite are called “emotes.” While the game itself is free to play, players can purchase the “emotes” and other character customizations.

Other artists, including Brooklyn-based rapper 2 Milly and “The Fresh Prince of Bel-Air” star Alfonso Ribeiro, also have sued Epic Games over other dances depicted in the shooting game. Ribeiro dropped his lawsuit against Epic Games last year after the U.S. Copyright Office denied him a copyright for the “Carlton” dance that his character performed on the 1990s sitcom.

Nickens and Brantley appeared on DeGeneres’ talk show alongside two New Jersey high school students who were posting videos of the dance online before the two University of Maryland basketball players filmed their own version. Brantley told DeGeneres that Nickens first showed him the dance in a video on Instagram.

“We dance every day for our teammates in the locker room,” Brantley said. “We were like, ‘Hey, let’s make a video and make everybody laugh.’”

“Plaintiffs seek to place the same square peg into eight round holes in search of a cause of action against Epic Games for its use of the Running Man dance in its game Fortnite. But Plaintiffs’ claims that Epic Games copied the dance do not support any of their theories,” the judge wrote.

Nickens was playing professional basketball in Canada and Brantley was working as a sports agent when they sued last year, according to Richard Jaklitsch, one of their attorneys. Jaklitsch didn’t immediately respond Monday to an email seeking comment.