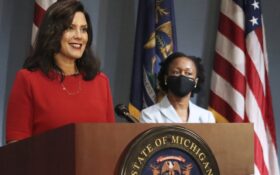 A judge on Tuesday suspended Michigan’s dormant, decades-old ban on abortion, which means the procedure would not be illegal in the state even if the U.S. Supreme Court overturns its historic Roe v. Wade decision.

The Michigan law, which makes it a crime to assist in an abortion, has been on the books since 1931. But it has had no practical effect since 1973 when the Supreme Court legalized abortion nationwide.

The court, however, could throw out that landmark ruling before July, leaving abortion issues for each state to decide.

“After 50 years of legal abortion in Michigan, there can be no doubt but that the right of personal autonomy and bodily integrity enjoyed by our citizens includes the right of a woman, in consultation with her physician, to terminate a pregnancy,” the judge said.

“From a constitutional standpoint, the right to obtain a safe medical treatment is indistinguishable from the right of a patient to refuse treatment,” Gleicher said.

Gleicher said other Michigan laws regulating abortion will remain in full effect. The injunction will stay in place while the judge makes a final decision in the months ahead or a higher court intervenes.

“No matter what happens at the Supreme Court, abortion access remains protected in Michigan while our full case proceeds to block this antiquated law once and for all,” said Dr. Sarah Wallett of Planned Parenthood, which offers abortion services.

The attorney general’s office typically defends against challenges to Michigan laws. But Attorney General Dana Nessel, a Democrat, said she would not defend or enforce the abortion ban. She, too, believes it is unconstitutional and welcomed the injunction.

John Bursch, an attorney representing Right to Life of Michigan and the Michigan Catholic Conference, was sharply critical, saying Gleicher had written an “extraordinary, unprecedented decision.” The groups weren’t formal parties in the case but were allowed to file opposing briefs.

“This is the kind of mess that you end up (with) in the court system when the state’s chief executive and its attorney general refuse to uphold and defend the law that has been in place since 1931,” Bursch said. “They may not like it. But no one has the ability to unilaterally ignore, change, encourage the invalidation of Michigan law. They should be working through the democratic process just like anyone else.”

It’s possible that the Republican-controlled Legislature could file an appeal. Gov. Gretchen Whitmer, meanwhile, called the ruling a victory.

“It will help ensure that Michigan remains a place where women have freedom and control over their own bodies,” the Democrat said.

In May, Politico published a leaked draft of a U.S. Supreme Court opinion, which showed the court could be poised to overturn Roe v. Wade.

The lawsuit by Planned Parenthood is one of two legal challenges in Michigan. Whitmer, who supports abortion rights, has asked the Michigan Supreme Court to bypass lower courts and declare the 91-year-old law unconstitutional. That effort is pending.

Both lawsuits preceded the leak of the draft opinion. But they’re examples of the scramble across the country as states prepare for the fall of Roe.

Gleicher, who also serves as chief judge on the Michigan Court of Appeals, informed the parties in April that she makes annual contributions to Planned Parenthood and, as a lawyer, represented the organization in a 1997 abortion case. She said she didn’t feel it should disqualify her.

“She should have recused herself,” Bursch said.