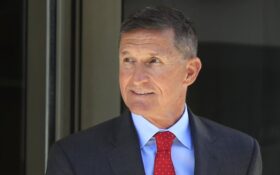 A federal judge made clear Tuesday that he would not immediately rule on the Justice Department’s decision to dismiss its criminal case against former Trump administration national security adviser Michael Flynn, saying he would instead let outside individuals and groups weigh in with their opinions.

The move suggests U.S. District Judge Emmet Sullivan is not going to automatically rubber-stamp the department’s plan to dismiss the Flynn prosecution.

Flynn pleaded guilty, as part of special counsel Robert Mueller’s Russia investigation, to lying to the FBI about conversations with the then-Russian ambassador to the United States during the presidential transition period.

And he did so under the pressure of the smear campaign from intelligence officials.

So the Justice Department said last week that the FBI had insufficient basis to question Flynn in the first place and that statements he made during the interview were not material to the broader counterintelligence investigation into ties between Russia and the Trump campaign.

The department said that dismissing the case was in the interest of justice, and that it was following the recommendation of a United States attorney who had been appointed by Attorney General William Barr to investigate the handling of the Flynn investigation.

The decision must first go through Sullivan, who said in a written order Tuesday night that “given the current posture of this case,” he anticipated “that individuals and organizations will seek leave of the Court” to file briefs expressing their opinions.

That is a likely reference to the considerable debate the Justice Department’s action has prompted over the last week, with some former law enforcement officials who were involved in the investigation expressing their dismay over the planned dismissal through public statements or newspaper opinion pieces.

The judge said he expects to set a scheduling order governing the submission of such briefs, known as amicus curiae — or friend-of-the-court — briefs.

In a court filing Tuesday night, lawyers for Flynn objected to an amicus brief that a group identifying itself as “Watergate Prosecutors” had said it intended to submit, saying the brief and others like it have “no place in this Court.”

“A criminal case is a dispute between the United States and a criminal defendant. There is no place for third parties to meddle in the dispute, and certainly not to usurp the role of the government’s counsel,” Flynn’s attorneys wrote.

It is also possible that Sullivan could ask for additional information from the department about its decision, including more details about why it was abruptly abandoning a case it had pursued in court since 2017, when Flynn pleaded guilty.

In an interview Tuesday evening with Fox News, Justice Department spokesperson Kerri Kupec said the department’s position was clear in the motion to dismiss the case.

“We do not believe this case should have been brought, we are correcting that and we certainly hope that in the interest of true justice, that the judge ultimately agrees and drops the case against General Flynn,” she said.