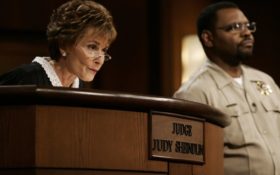 One of America’s most famous judges is being taken to court — and she’s ready to literally eat her contract.

TV’s Judge Judy is making headlines in a bitter fight over her successful television show’s profits… and it was what she said amid the battle that stunned everyone.

Rebel Entertainment Partners, successor to the talent agency behind “Judge Judy,” claims that the 77-year-old violated contract negotiations when she bought and sold the show’s episode rights, according to Page Six.

Sheindlin rejected the charges and said if Rebel Entertainment can produce the contract she’d literally eat it.

And she responded to Rebel Entertainment and its President Richard Lawrence with a blistering soundbite:

“I have not seen the complaint and can therefore only comment on what I have read which suggests that I am being sued for ‘breach of contract,'” she began to tell Page Six.

The Brooklyn-born judge then raised the stakes in dramatic fashion.

“If that is the basis of Mr. Lawrence’s lawsuit, here is my challenge: If Mr. Lawrence can produce a contract, signed by me and Mr. Lawrence on the same page, at any time in history from the beginning of time, I will toast that contract, smear it with cream cheese and eat it on national television.”

Whether or not the challenge has been agreed upon remains to be seen.

Although Judy Sheindlin has been deciding cases for years, she’s no stranger to fending off legal challenges of her own.

Sheindlin had previously settled a lawsuit over her $47 million salary, when Rebel Entertainment claimed that she had improperly taken her salary as an expense, according to The Hollywood Reporter.

That could buy a lot of cream cheese…