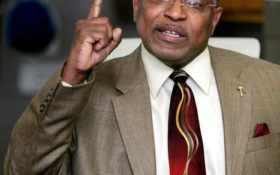 So far, the administration of former President Barack Obama has gotten away scot-free with targeting Tea Party groups, using the IRS to harass conservatives, and denying patriots their First Amendment rights.

But that could all change soon. Experts say it looks like liberal lawbreakers could be getting set to face some jail time after a federal judge gave an order that could blow the entire conspiracy wide open this week.

The judge looked the IRS’s lawyers in the eye and demanded that they name every official involved in the scandal to deny Tea Party groups their First Amendment rights. He wanted all the details that would let him punish the guilty parties.

“Lay it on the line. Put it out there,” Judge Reggie B. Walton said.

The Horn News readers will remember the IRS Tea Party scandal. From the minute Obama took office in 2009, he used the tax agency to harass his opponents, especially conservatives from Middle America.

When conservative groups applied for tax-exempt status, the IRS demanded massive amounts of unnecessary paperwork about every aspect of their operation – anything to slow them down.

The interference was illegal, unconstitutional, and absolutely ludicrous.

When one pro-life group in Iowa said it planned to hold prayer meetings, the IRS wrote back saying, “Please detail the content of the members of your organization’s prayers.”

This is the same IRS that thinks George Soros’ goons have the right to beat up Trump supporters and tear down statues as a form of “free speech.” But they don’t think citizens have a right to pray to God in private meetings without getting the government’s approval?

If Tea Party groups ever got IRS permission to organize, the Obama administration flagged them to be audited in the future. One of the players, Holly Paz, wrote that she’d make sure to “refer these organizations to the Review of operations for follow-up in a later year.”

Lois Lerner, the far-Left woman Obama chose to lead the IRS, finally admitted some of the scandal in 2013. But she tried to lie that just a few rogue agents in the Cincinnati office were responsible for it all. That blew up in her face when e-mails showed the Obama administration was behind it the whole way.

Then she stonewalled the Congressional investigation and retired with a nice, fat government pension – estimated at $102,600 a year. She even got $129,000 in bonuses. All funded by you.

But now a federal judge says that’s all over, and the IRS officials could be in hot water.

The hero is Reggie B. Walton, a federal judge in Washington, D.C., who was appointed to the bench by President George W. Bush.

On August 17, he told the IRS to name the names of every official who was involved in this travesty of justice, explain exactly why they targeted conservatives, and what the IRS has done since then to prevent this from ever happening again.

He gave the IRS until October 16 to search for all the records related to the five-and-a-half years of Tea Party persecution under Barack Hussein Obama.

The 38 groups suing the government say it’s about time. The Democrats tried to deny them their First Amendment rights.

Obama knew these hometown patriots would speak out about his blatant corruption. They weren’t interested in getting a D.C. job and couldn’t be bought off like his Republican “opposition.” They’d tell the truth about Obamacare, Fast and Furious guns, mass amnesty for illegal immigrants, gun control, trillions more in national debt, and every other illegal action he took during his eight years in office.

But he knew something else; the Tea Party people were just average working Americans — moms and dads with families, struggling to find a job after he wrecked the economy. They had bills to pay… and sometimes their children’s and grandchildren’s bills. They couldn’t afford to fight the IRS or pay a high-powered lawyer, the way George Soros’ radicals can.

So, they say the government persecuted them until the minute Obama left office. And to this day, the IRS is still trying to hide the names of people responsible.

He knows there’s plenty there — including possibly jail time for the Obama officials who conspired against them for years.

Lois Lerner and Holly Paz agreed to testify … but only if the judge would keep their testimony secret. They claim the Tea Party members have made death threats against them.

So far, the IRS and the Justice Department want to help them keep the secret. Both agencies gave evasive answers about whether they would obey Judge Walton’s order.

This is how they do it in D.C. They’re circling the wagons to protect the Deep State from accountability — to a judge, to President Donald Trump, the American people, anyone.

They can break the law, persecute their opponents, hide the evidence, and ride off into the sunset with a government pension and benefits for life.

It’s their country — you just get to pay the taxes for it.

God bless Judge Walton for trying to see that justice is done. But he could use some help.

Trump needs to fire the head of the IRS, Joel Koskinen, who has refused to cooperate with the Congressional investigation into this scandal. Congress wanted to impeach Koskinen, an Obama appointee who somehow still has his job for another three months.

Then, Trump needs to form a special committee to comb through the entire federal government — every employee, top-to-bottom, and find the liberal activists, the left-wing lawbreakers, the union-protected incompetents who are using the government for their own purposes and fire every single one of them.

You know how to say that better than anybody.