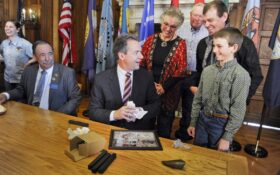 The June 17 ruling by the 9th U.S. Circuit Court of Appeals upheld a 2016 decision by U.S. District Judge Susan Watters of Billings that found dinosaur fossils were part of the surface estate, not the mineral estate, in cases of split ownership. The surface rights where the fossils were found are owned by Mary Ann and Lige Murray.

“The composition of minerals found in the fossils does not make them valuable or worthless,” Watters wrote. “Instead the value turns on characteristics other than mineral composition, such as the completeness of the specimen, the species of dinosaur and how well it is preserved.”

Brothers Jerry and Bo Severson, who owned two-thirds of the mineral rights on property once owned by their father, appealed Watters’ decision to the 9th Circuit.

A three-judge panel of the appeals court overturned Watters’ ruling in February 2018, but the Murrays asked for a larger panel of judges to hear the case.

In the meantime, the 2019 Montana Legislature passed a bill stating that dinosaur fossils are part of a property’s surface estate unless they are reserved as part of the mineral estate.

“Because Mary Ann and Lige Murray are the undisputed owners of the surface estate here … the (Montana) Supreme Court’s decision requires a resolution in their favor,” Chief Judge Sidney R. Thomas wrote on behalf of himself and 10 other members of the 9th Circuit.

The dinosaurs unearthed on the ranch include a T. rex found in 2013, a triceratops skull discovered in 2011 and the 2006 discovery of a pair of dinosaurs that appeared to have been locked in battle when they died.

The T. rex was sold for millions of dollars. The so-called dueling dinosaurs drew a bid of $5.5 million in a 2014 auction, but failed to reach the $6 million reserve price.

In a legal effort to clarify the ownership of the dueling dinosaurs before trying to sell them, the Murrays sought a court order saying they owned the fossils, sparking the legal battle.