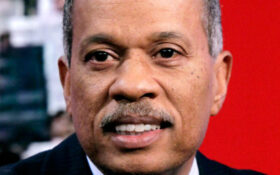 Fox News star Juan Williams, the liberal host of the popular talk show The Five, suddenly announced he was leaving the show at the end of Wednesday’s broadcast.

And the rumor is that he was pushed out by the cable giant’s newest primetime star and The Five regular Greg Gutfeld, who often clashed with Williams.

The Five had been filming remotely after Williams contracted COVID-19 in December. Gutfeld reportedly wanted to return the show to return to their New York City studio, but Williams refused.

Observers noted that their exchanges — often heated — had become increasingly more intense in recent months. Still, Williams’ departure from the show came as a surprise to viewers.

Williams cited his experience with coronavirus as the reason for his decision. He said he will continue to work with Fox News as a political analyst, but will no longer co-host.

“This is my last day hosting The Five,” Williams announced at the end of Wednesday’s show. “Covid taught me a lot of lessons. As the show goes back to the New York studio, I’ll be staying in DC.” I’ll be working for Fox out of Washington. My work as a Fox News political analyst will continue.”

Williams thanked fans for his time on the show.

“You know, it’s been going on seven years since I have been a daily host of this show,” he said. “The show’s popularity has grown every single year, so thank you. Thank you so much to you, the viewers. Thank you.”

Insiders reportedly said that Gutfeld was pushing for an in-person return, but Williams refused. One source reportedly told The Daily Beast that Gutfeld was “really pissed they’re not all back in the studio together and he blames Juan for not being back.”

However, Fox News forcefully denied the rumor that “Gutfeld had anything to do with the move whatsoever” and issued a statement through Megan Albano, Fox News’ vice president of The Five.

“As Juan Williams announced on-air today, he will be leaving The Five to live in Washington, D.C. full time. We are incredibly grateful for his commitment to the show and its success over the last several years,” Albano’s statement said. “As we started planning The Five’s return to its New York City studio at our headquarters a few months ago, Juan decided to stay in Washington, DC permanently.”

“We accommodated his request, understanding and appreciating his desire to remain closer to his family and recognizing that a remote co-hosting role on a roundtable in-studio program was not a long-term option,” Albano said.

“While we will miss his insightful contributions each night and look forward to welcoming him on set whenever he’s in New York, we are pleased to have him continue his longtime role as a senior political analyst with Fox News Media,” she added.

The network said they plan to use rotating liberal co-hosts to fill in for Williams as the counter-balance to the four other conservative hosts while they search for a permanent replacement.