Joshua Tree park closes over this - The Horn News 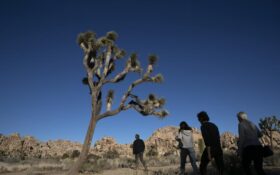 A popular hiking trail to an oasis in Joshua Tree National Park has been temporarily closed so bighorn sheep can get undisturbed access to water.

“The park is under extreme drought conditions and herds in the area are increasingly reliant on the oasis spring to survive the hot summer months,” a park statement said.

The Fortynine Palms Oasis spring is surrounded by palms in mountains on the northern side of the park.

The closure started June 1 and will remain in effect until summer monsoon rains provide enough water for the bighorns.

They are among a population of about 13,000 in parts of California, Nevada, Arizona and Utah, according to the Joshua Tree website.

The current population is about 10% of what it was before the settlement of the western U.S., the website said.

The park also warned hikers that summer temperatures on trails can reach more than 120 degrees (49 Celsius).

Hikes should begin before or at sunrise and be completed by 10 a.m., or not begin until after 4 p.m., to avoid risk of heat illness and death.