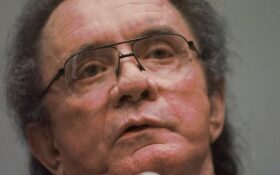 The Man in Black is now being honored on the Mississippi Country Music Trail.

In the early hours of May 11, 1965, Cash was arrested for public drunkenness after he was found picking flowers at a private home after a show at Mississippi State University. He spent the night locked up, and that served as inspiration for his song, “Starkville City Jail.”

“I’m so delighted that Mr. Cash did not realize it was the Oktibbeha County Jail,” Starkville Mayor Lynn Spruill said. “That wouldn’t have been a good song. I’m delighted that he called it Starkville.”

Cash was symbolically pardoned for his arrest in Starkville in 2007 at the inaugural Johnny Cash Flower Pickin’ Festival, the Commercial Dispatch reported.

Spruill said the new marker highlights an experience that Cash believed was the beginning of his road to personal redemption.

The marker is at the corner of Mississippi Highway 182 and Jackson Street in Starkville. It is 35th marker on the Mississippi Country Music Trail.

Arkansas legislators recently voted to designate a “Johnny Cash Day” to honor the late entertainer, who was born in that state in 1932. Cash died in 2003 in Nashville, Tennessee.