John Kerry: The election was rigged - The Horn News 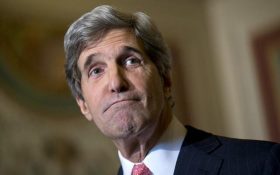 Allegations of voting irregularities in the 2020 election have caused a flurry of lawsuits, recounts, and voting audits.

The mainstream media has unofficially called the election for Democratic presidential candidate Joe Biden and dismissed concerns that illegal activity might have taken place, despite the ongoing legal process.

Supporters of President Donald Trump may have found an unlikely ally, though.

Kerry once told a foreign leader that election irregularities at voting machines stole the presidential election by switching votes.

Only it wasn’t irregularities in the 2020 election he was talking about.

Instead, Kerry claimed for years that voting machine glitches may have stolen the 2004 presidential election from him.

He told an Afghan presidential candidate in 2004 that “we had problems in the state of Ohio on how the votes were taking place.”

“Even in my country, the United States, where we had hundreds of years of practicing democracy, we still had problems carrying out that election,” Kerry said.

Mark Crispin Miller, a New York University professor, said that John Kerry personally “told me he now thinks the election was stolen. He says he doesn’t believe he is the person that can be out in front because of the sour grapes question. But he said he believes it was stolen.”

Kerry’s wife Teresa Heinz told a group of Democratic donors in 2005, “Two brothers own 80 percent of the [voting] machines used in the United States.” She said it is “very easy to hack into the mother machines.”

“None dare call it stolen,” Harper’s Magazine wrote about the election irregularities the next year.

“No conspiracy theorist, and no fan of John Kerry’s, the author nevertheless found the Ohio polling results impossible to swallow,” Vanity Fair wrote in 2005. “Given what happened in that key state on Election Day 2004, both democracy and common sense cry out for a court-ordered inspection of its new voting machines.”

“The irregularities were sufficiently widespread to call into question Bush’s margin of victory. This was not a fair election, and it deserves the scrutiny skeptics have brought to it,” Mother Jones wrote.

“They shouldered a task that mainstream media and the government should have assumed—and still should take on, especially since some key questions can only be settled by invoking subpoena power.”

Now, however, the mainstream media has dismissed concerns among Trump supporters and Republicans that election malfeasance could have cost the president his re-election bid.

News anchors and Democratic politicians have loudly called on Trump to concede. They’ve demanded he stop fighting the election results.

But they sing a different tune when it’s a Republican that wins the White House.