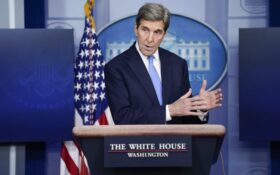 Like EU Commission President Ursula von der Leyen, Biden has said that fighting global warming is among his highest priorities. Biden had the United States rejoin the Paris climate accord in the first hours of his presidency, undoing the U.S. withdrawal ordered by predecessor Trump.

Despite leaving the climate change accord, the United States booming natural gas industry had put the country well under the emissions reductions required by the international council.

In other words, the U.S. was doing better than promised without being controlled by foreign interests.

Kerry will meet with the EU Commission vice-president in charge of climate action, Frans Timmermans, and discuss preparations for the next U.N. climate summit in Glasgow in November. He will also talk with von der Leyen and join a weekly commission meeting on transatlantic climate action.

The 2015 Paris climate change accord commits countries to put forward plans for reducing their emissions of greenhouse gases such as carbon dioxide, which is released from burning fossil fuels. European Union leaders reached a hard-fought deal in December to cut the bloc’s net greenhouse gas emissions by at least 55% by 2030 compared with 1990 levels.

The EU wants to be a leader in the fight against global warming and has pledged to reach climate neutrality by mid-century as part of its European Green Deal action plan, The Biden administration has yet to announce a new national 2030 target for cutting U.S. fossil fuel emissions.

In addition to the U.N. climate summit in November, Kerry will also discuss preparations for a U.S.-hosted climate leaders summit on April 22-23.