John Kerry FURIOUS after learning this (ouch!) - The Horn News 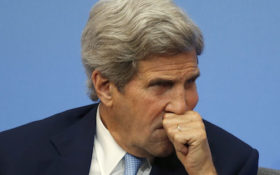 Former Secretary of State John Kerry has been feverishly working behind-the-scenes to try and save former President Barack Obama’s terrible Iran nuclear deal — and he did more harm than good.

According to the White House, it was Kerry’s own meddling that ultimately pushed President Donald Trump to rip the deal to shreds.

Sponsored: Something is off in this photo of Reagan

John Kerry can’t get over the fact that he had his chance and blew it! Stay away from negotiations John, you are hurting your country!

The news of the deal’s cancellation reportedly left both Obama and Kerry fuming.

Kerry “has an ax to grind with Trump and is trying to preserve his legacy as secretary of state,” Republican strategist Ford O’Connell told The Boston Herald. “He really only has two feathers in his cap: the Iran nuclear deal and the Paris climate accord, which Trump both torpedoed.”

While America’s European allies condemned Trump’s move, those threatened by Iran’s nuclear program —  Israel, Saudi Arabia and Iran’s other rivals — celebrated the news. Those near Iran have long wanted to scuttle the nuclear deal, which they see as undermining the strategy they say the world should be taking: a tough, confrontational stance against Tehran’s ambitions in the region.

Traditional foes Saudi Arabia and Israel — both U.S. allies — have found common ground as critics of the 2015 deal, which was brokered by Iran, Kerry, and the five permanent members of the U.N. Security Council, Germany and the European Union.

Trump’s decision Tuesday to withdraw from the accord doesn’t mean the deal’s immediate collapse — the Europeans still back it, and much depends on how Iran reacts. But it does deeply weaken the agreement and could open the way for the U.S.’s regional allies to take a more aggressive approach on Iran.

Sponsored: Could this fabled miracle give you the heart health that your body has been craving in just 20 seconds?

The deal was strongly opposed by both Democrats and Republicans in Congress. The Senate refused to ratify the deal after it was struck, a bipartisan rejection of Obama’s move. Legal experts called it an illegal overreach by the Obama White House.

As part of the deal, the Obama administration secretly paid $1.7 billion in cash to Iran. Critics say this money was used to fund the terror group Hezbollah as well as the Syrian civil war, which caused the migration crisis in Europe that same year.

Israeli Prime Minister Benjamin Netanyahu also actively sought to scuttle the deal from the start, even when it was still being brokered. He has bluntly said the world would be better off without any deal than with what he calls the “fatally flawed” agreement reached during the Obama administration.

He has pushed for confrontation against Iran as the Shiite-led nation builds up its military presence in neighboring Syria in support of President Bashar Assad. Netanyahu warns Iran will use its troops and weaponry there to threaten Israel.

“We are determined to block Iran’s aggression against us even if this means a struggle. Better now than later,” he said this week at a Cabinet meeting.

Israel is suspected of being behind strikes on Iranian bases in Syria in recent weeks that killed a number of Iranian and Syrian troops. Leaders in Iran have been cautious not to retaliate against Israeli provocations at a time when the nuclear deal still has backing from other major world powers.

That could change if the deal breaks down. Israeli security officials say the military already has gone on heightened alert this week, fearing an Iranian reprisal.

Supporters of the deal say it places strict limits on Iran’s nuclear facilities that make it unable to produce a bomb during the lifetime of the deal.

Critics of the deal object to a sunset provision that would allow Iran to resume enriching uranium at high levels in 15 years, unless an extension or longer-term deal is negotiated. Europe could join the U.S. in re-imposing sanctions in retaliation if it does so.

Opponents also point to issues that are not addressed in the deal, such as Iran’s ballistic missile program, its support for militias in the region and its expanding influence.