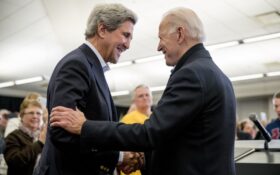 Since leaving the Obama administration five years ago, former Secretary of State John Kerry has been serving as President Joe Biden’s climate czar.

But there’s a video that Biden hopes doesn’t go viral. Kerry was seen giving a warm greeting to a communist tyrant… a break from the Biden administration’s official policy.

Kerry was shaking the hand of Venezuela’s dictator Nicolas Maduro: a communist reviled for leading his once-prosperous country into famine, constitutional crisis, and inflation exceeding 1,700,000 percent.

The United Nations has probed Maduro’s administration for possible violations of human rights, but Kerry shook his hand anyway.

John Kerry gets chummy with U.S.-sanctioned dictator Nicholas Maduro, who was indicted on four counts (including narco-terrorism). The USG has a $15 million reward for information leading to Maduro's arrest. pic.twitter.com/wTCcIYQHKj

By contrast, President Joe Biden declined to shake the hand of Saudi Crown Prince Mohammed bin Salman. He opted for a fist bump instead.

At the time, Americans had been criticizing the Saudi administration for producing too little oil and for presiding over the assassination of a Washington Post journalist.

Kerry has previously landed himself in hot water for possible violations of other U.S. foreign laws, like the Logan Act.