John Kelly: Dreamers are not top targets - The Horn News 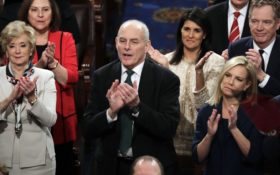 “Dreamers” protected by an Obama-era program that President Donald Trump has said will end on March 5 are not top targets for deportation as long as they lack criminal records, the White House chief of staff said Tuesday.

John Kelly also dismissed the idea of a short-term extension of the Deferred Action for Childhood Arrivals program beyond March 5 to give the administration and Congress more time to work out compromise legislation.

“What makes them act is pressure,” he said of Congress.

Kelly’s remarks, to a small group of reporters at the Capitol, came as lawmakers have deadlocked in an effort to reach a bipartisan deal on protecting from deportation recipients of the program, called DACA. Barring a last-minute agreement — which seems unlikely — Senate Majority Leader Mitch McConnell, R-Ky., has said his chamber will begin considering the issue, a debate that GOP leaders expect to start next week.

A federal judge has indefinitely blocked Trump from terminating DACA’s protections for the so-called Dreamers. The program shields them from deportation and gives them the right to hold jobs.

Many lawmakers are uneasy about what might happen to the Dreamers after March 5, and Democrats — and Trump himself — are using that uncertainty as leverage to help force a deal. Kelly’s remarks seemed aimed at easing worries that major deportations of Dreamers could begin right away.

He described a lengthy legal process that often takes years that immigrants in the U.S. illegally face before they are deported. He said an immigrant here illegally who doesn’t commit crimes “never comes onto anyone’s scope.”

He added, “They are not a priority for deportation.”

Trump has proposed creating a pathway to citizenship for up to 1.8 million immigrants covered by DACA who might potentially qualify for its protections.

In exchange, Trump wants $25 billion for border security, including money to build his border wall along the U.S.-Mexico border. He also wants to curb legal immigration, restricting the relatives that legal immigrants could sponsor for citizenship and ending a lottery that distributes visas to people from diverse places like Africa.

Kelly said he doubted Trump would act unilaterally to extend DACA beyond March 5. He cited the administration’s argument that former President Barack Obama exceeded his constitutional authority in initially creating it.

He also ruled out asking lawmakers to approve a short-term extension of the program. And he said he opposed one idea mentioned in the Capitol as a possible fallback should talks on a broader bipartisan compromise fail — a one-year extension of DACA in exchange for a year’s worth of money for border security, including for building Trump’s wall.

Trump said last September that he was ending the DACA program, complaining that Obama had overstepped his legal authority in creating it.

But while his 2016 election campaign was laced with anti-immigrant remarks, he’s expressed sympathy for the Dreamers and he gave Congress until March 5 to pass legislation protecting them.