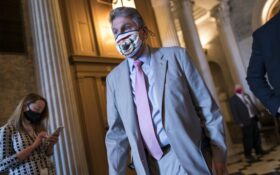 The Democratic Party isn’t happy with Sen. Joe Machin, D-W.V. — and far-left protesters are planning to target his house on Thursday afternoon.

Well… his houseboat, that is.

Manchin lives on a modest houseboat docked in Washington, D.C. while the Senate is in session.

Protesters are marching to the harbor to demand Manchin vote to support Democratic efforts to add the District of Columbia as the 51st state.

Voting along party lines with minority Republicans in opposition, the House approved the bill to add D.C. as a state 216-208 this week. That’s likely the easy part, though. The proposal faces a far tougher fight in the Senate, where simple Democratic control of the chamber won’t be enough.

Manchin, a conservative Democrat, is one of the leading opponents of the bill.

The legislation proposes creating the 51st state with one representative and two senators, while a tiny sliver of land including the White House, the U.S. Capitol, and the National Mall would remain as a federal district. Instead of the District of Columbia, the new state would be known as Washington, Douglass Commonwealth — named after famed abolitionist Frederick Douglass.

The addition of a new state would forever alter the balance of power in Congress, observers note. Washington, D.C. is heavily blue and would add two far-left Democratic senators to the current 50-50 split. The tie-breaking vote in the Senate is cast by the vice president.

An identical statehood bill passed the House in 2020, but it quickly died in the then-Republican-controlled Senate. Now, with the 2020 elections leaving Democrats in control of both chambers and the White House, Republican senators may resort to a filibuster to stymie the statehood bill.

The country’s founding fathers, “never wanted D.C. to be a state and then specifically framed the constitution to say so,” said Georgia Republican Rep. Jody Hice. “This is absolutely against what our founders intended and it ought to be soundly rejected.”

During a March hearing by the House oversight committee, GOP representatives called the entire effort a cynical Democratic power play.

Opponents proposed a variety of alternatives, from absolving Washingtonians of federal taxes to “retroceding” most of D.C. back into Maryland.

Zack Smith, a legal fellow at the Heritage Institute, a conservative think tank, testified before Congress last month that since D.C.’s creation and limitations are enshrined in Article I of the Constitution, its status can only be changed through a constitutional amendment.

He also argued that D.C. shouldn’t be made a state at all and that the Founding Fathers “intended this to be a federal district outside the jurisdiction of any one state.”