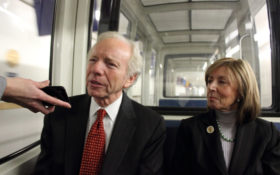 Former Senator Joe Lieberman predicted the future of his party a little more than a year ago.

Stay away from Rep. Alexandria Ocasio-Cortez, D-N.Y. —  or else the far-left will drive Democrats into the ground.

“The Democratic party is not going to have a very bright future…” he said, specifically warning that Democrats wouldn’t win a single election if Ocasio-Cortez becomes the face of the party.

Of course, Lieberman didn’t say this because of her race.

It’s her policies that aren’t good for the country — and American voters know better. Even Lieberman, an estalishment Democrat, can see the writing on the wall.

“When you look at the policies, those are not policies that will be supported in very many places across America.”

From the beginning of Ocasio-Cortez’ career, he begged New Yorkers to vote for the incumbent congressman she was running against as part of an op-ed in the Wall Street Journal.

A year later, and Democrats are so consumed by Trump Derangement Syndrome that they’ve crowd to a dysfunctional halt, with lawmakers seemingly having no idea where they’re leading the party.

Even Lieberman saw this coming.

“If it’s going to be a revolutionary party, a far-left party as Ocasio-Cortez, etc. [wants] it to be, it’s not going to win elections in America cause that’s not America,” he said in a recent interview with Fox Business.

Even hardcore Democrats are joining Lieberman, according to Ocasio-Cortez’ awful favorability numbers.

Voters are making their voices heard.

And even Joe Liberman says Democrats have gone too far.