Joe Lieberman is back... and he's backing Trump!? - The Horn News 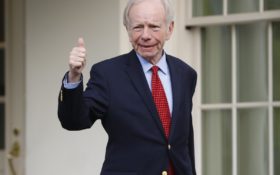 Former Vice Presidential candidate Joe Lieberman is back — and he may be jumping ship from the Democrats.

This week, Lieberman spoke before a crowd of Iranians that escaped a brutal regime in their homeland and praised President Donald Trump for his handling of the Iran Nuclear Deal.

“What I’m about to say, I’m saying as a Democrat. And I’m saying that somebody who didn’t vote for Donald Trump in 2016, and it’s why I hope you believe I’m saying with all the more sincerity,” Liberman said.

“President Trump has been heroic and historic at taking the actions he has to break the Iran nuclear agreement, to impose sanctions on the Iranian government.”

The crowd broke into applause.

Beyond praise for the Trump administration, he’s also shown increasing scorn for his fellow Democrats, saying they’ve had a “mindless resistance” to Trump — in other words, Trump Derangement Syndrome.

Lieberman even slammed Rep. Alexandria Ocasio-Cortez, D-N.Y., and said she her ultra-leftist politics were dangerous for the Democratic Party’s future.

He may be right.

A recent Axios poll shows that only 22 percent of voters have a favorable view of Ocasio-Cortez.

Meanwhile, 54 percent of Americans say that Trump is going to be re-elected, according to a CNN poll.

You can watch a clip of his speech below: