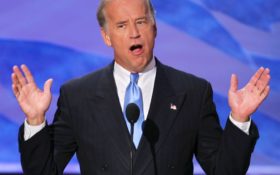 Democratic 2020 presidential candidates know they can’t win with American voters, so they cooked up a different plan: Move in as many people from foreign countries as possible before the election. And their success is our nightmare.

One percent of the entire population of two Central American countries—Guatemala and Honduras—has moved to the United States since September, a shocking new study has discovered.

And according to Joe Biden, American tax payers owe them.

That’s right. One out of every hundred villages, hospital wards — and prisons — swam across the Rio Grande or walked through the southern desert since January. And Biden wants you to open up your wallet to help bear their healthcare burden.

The data is according to the Washington Examiner. It’s only taken nine months for that many illegal aliens to swarm into our country, and there’s no end in sight.

In February government agents caught 75,000 illegal immigrants trying to enter the United States. In March, it was 100,000—the highest level in a decade.

“The overwhelming surge of migrants has created a system-wide meltdown as resources and personnel at the border are being stretched completely beyond their capacity,” President Trump warned the country—early last month.

But in April, federal agents stopped another 109,144 people either entering illegally or sneaking through ports of entry.

All together, more than half-a-million illegals tried to cross the U.S. border in the last few months… and that’s more than all of 2018!

Illegal immigration is already the most common crime in America, tying up one out of every three court cases in the country.

“Our system is not equipped to handle the influx of children and families arriving at our border by the day,” said Congressman Mike Rogers, R–Alabama.

We’re in a major border crisis — and the liberals don’t want anything done.

The Trump administration tried to tell Congress this was coming. Then-DHS Secretary Kirstjen Nielsen testified earlier this year that between 900,000 and a million illegal immigrants could overwhelm the system in 2019.

Once again, the Trump administration’s math was dead-on.

If anything, expect those numbers to skyrocket. Two percent of all Hondurans told the Gallup Poll they were actively trying to come to America  as of last November—and that’s  not even counting children, since the team only talked to people who were 15 or older.

There were  8,897 children who tried to cross the border by themselves last month—and even more posed as “families.”

As a matter of fact, 16 percent of the total population of Central America has said it’s interested in permanently moving norte to the U.S.

Only about half of the people surveyed who planned to come to the U.S. have made it so far—and their success will supercharge the caravans and human traffickers smuggling people into the country.

And so will the Democrats’ plan.

They want to promise so much free stuff to “undocumented migrants” that illegals will flow into America in droves… and maybe even vote illegally in 2020.

Biden jumped on the bandwagon of presidential hopefuls who are promising illegals “free” doctors visits, medicines, and surgeries on the taxpayers’ dime.

“I think that anyone who is in a situation where they’re in need of health care, regardless of whether they are documented or undocumented, we have an obligation to see that they are cared for,” Biden said last Wednesday.

America has an “obligation” to give health care to the whole world, Joe?

But “Sleepy Joe” is a follower, not a leader.

Paying for the whole world’s sick to come to U.S. hospitals is straight out of Bernie Sanders’ insane “Medicare for All” plan—and supported by at least eight Democratic candidates.

Kamala Harris told CNN on Sunday she’s “opposed to any policy” that would deny taxpayer-funded medical care to “any human being.”

So, the Democrats running for president line up to offer illegal immigrants free health care and education.

Meanwhile, Chuck Schumer and Nancy Pelosi have bottled up any money to build the wall for months. Schumer said the wall is dead on arrival in the Senate and Nancy Pelosi says walls are “immoral”–unless they’re around her San Francisco mansion.

And as far as the Democrats are concerned, Central America is just the start: They really want the whole world to come here.

According to that Gallup poll, roughly three percent of all adults in the world would like to move to the United States.

Guatemala and Honduras have sent hundreds of thousands of people to live here already.

How long can it be until the rest of the world follows?