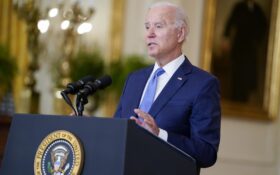 Americans aren’t having a very Merry Christmas season as President Joe Biden’s economy staggers toward the end of a rocky first year marked by high prices, empty shelves, and an unstable labor market.

Biden says it’s not his fault.

He and his team blame the pandemic and former President Donald Trump.

But the poll numbers show Americans are blaming him, and for good reason: Biden ran on a platform of controlling the virus and restoring the economy.

So far, he hasn’t done either, leading to an approval rating marked by volatile swings and rapid declines.

And while the pandemic certainly has played a role in the state of the economy, experts say Biden and his team have mismanaged it on nearly every level, including three key missteps that have led to today’s struggles.

INFLATION: Biden and his economic advisors claimed in spring that inflation would be brief and temporary… and one even vowed it would peak in summer and be over by autumn.

Assuming it was temporary, they didn’t act – and now, the nation is seeing some of its most eye-popping inflation numbers in decades.

The Consumer Price Index jumped by 6.2 percent in October compared to a year ago, the biggest increase in more than 30 years, and prices of grocery staples meat, poultry, fish, and eggs shot up by 11.9 percent year-over-year. It jumped even higher in November.

Just before winter, fuel oil is up 59 percent year-over-year.

Now, Team Biden has admitted that inflation will stick around. Treasury Secretary Janet Yellen said it will be with us through next year, and an index used by bond traders suggests they believe it’ll remain well above average for the next five years.

UNEMPLOYMENT: Companies have tons of job openings – but they can’t find workers, in large part because many earned more by staying home.

Last year, at the height of the pandemic, Congress approved enhanced unemployment benefits for those unable to work due to coronavirus shutdowns.

But as businesses reopened, workers continued to collect those benefits.

Instead of ending the enhanced benefits when the economy reopened in spring, Biden extended the program until September, giving many little incentive to return to the workplace.

SUPPLY CHAIN: Biden and his team were caught flat-footed by massive logistical challenges as overseas factories rushed to catch up on the surge in consumer demand but have been unable to get their products into the nation.

There are ships lined up offshore because there is no space in the ports… and when there is space, there are fewer people working to unload the ships.

Once the ships are unloaded, there are fewer trucks to transport the merch.

The result has been a bottleneck of goods that’s increased already surging demand and helped fuel the inflation crisis.

Biden ordered some measures in October, such as 24/7 operations at key ports, but experts say it was too little, too late.

“What the president’s doing isn’t going to really hurt. But at the end of the day, it doesn’t solve the problem,” Steven Ricchiuto, U.S. chief economist at Mizuho Securities, told Reuters.

One economist warned that supply-chain struggles will linger into mid-to-late next year.

“Unfortunately, it does look like things are likely to get worse before they get better,” Jennifer McKeown, head of the Global Economics Service at Capital Economics, told The New York Times.

Yet Biden has given himself high marks.

“The bottom line is this: The Biden economic plan is working,” he crowed in May, boasting of “record job creation… record economic growth.”

But the real story isn’t in statements to the media, but measures such as consumer sentiment, which plunged as the year progressed.

Americans will have another chance to make their sentiment known coming up in 2022 when they go to the polls for the midterm elections.